Coming Soon to this Screen 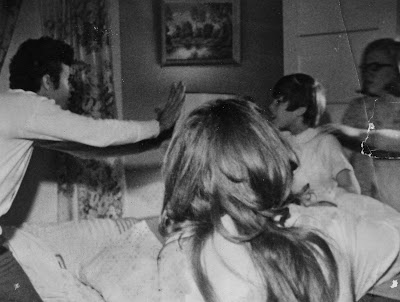 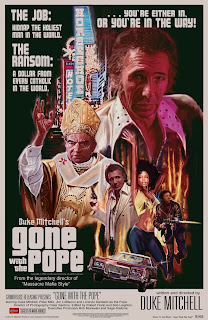 It's here.  Can you believe it?
On Friday, March 12th, 2010, Duke Mitchell's never-released Gone with the Pope will finally have its world premiere at The Egyptian Theatre in Hollywood.  Filmed in 1975, the film sat unfinished until ace editor and Grindhouse Releasing head honcho Bob Murawski decided to take a crack at it.  Little did he know just how long it would take...
Cinema Arcana:  When did you first get interested in the films of Duke Mitchell?
Bob Murawski:  Back in 1995, Bill Lustig and I watched the Video Gems VHS of The Executioner (aka Massacre Mafia Style).  I think Sage Stallone had given him a copy, but I hadn't met him yet.  We both thought it was one of the funniest, most off-the-wall and entertaining movies we had ever seen.
CA:  How did the finding and restoration of Gone with the Pope come about?  What did the restoration require?

BM:  After watching The Executioner, we said we've gotta find this guy Duke Mitchell and meet him.  Bill called around and discovered that Duke had died in 1981.  We were pretty saddened to find that out, but a couple of days later Bill called me and said he found Duke's son, Jeff.  He was living in an apartment in Hollywood only about two blocks from where Bill was living!  So I went over to Bill's place, met Sage for the first time, and the three of us went over to Jeff's place.  We told him we were big fans of his father and wanted to find his movie The Executioner and re-release it.  Jeff said he had no idea what happened to that movie, but said he had another feature that his Dad made after The Executioner that was shot but never finished.  He said he didn't think it had even been edited, and if we wanted to take it and try to do something with it then go ahead.  Of course, we said, "ABSOLUTELY!" 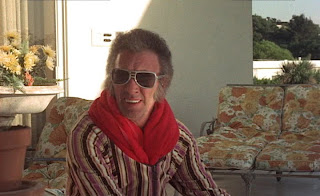 We went down to his parking garage and pulled a bunch of dusty old boxes out of his storage closet that had been there since Duke passed away.  Everything was there—the negative, sound tapes and work picture, along with some paperwork that helped us piece everything together.  There was no shooting script, per se, just a lot of scenes written out in notebooks, loose pieces of paper, and, in a couple of instances, backs of envelopes and cocktail napkins!  There was a very crude rough assembly of the movie, but it was long and nowhere near being finished.  17 reels and, of that, reels 9-13 were totally missing and never found.  We screened the reels and found it to be incredibly entertaining—totally different than The Executioner, but still a Duke Mitchell movie through and through.  However, since it was in such rough shape, we knew finishing would be a big job and would probably take a few years.  It ended up taking sixteen!  We started trying to fine cut the movie, working from the assembly, then going back to the trims and outtakes when necessary to smooth things out and make the scenes and story flow better.  For the reels that were totally missing, we carefully went through the original negative to determine what we didn't have, and made fresh work print of that material, which was then edited from scratch.  Two other friends helped me with the editing -- Paul Hart and Jody Fedele, both of whom had worked with me on a lot of other movies like Army of Darkness and Hard Target.  The whole thing was a giant jigsaw puzzle.  Very time consuming.  I worked on it whenever I had time between my real editing jobs over the past 15 years. 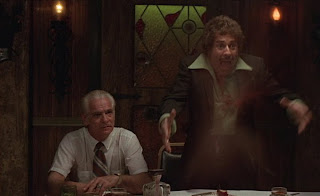 I finally finished the picture cut in the time I had between Spider-Man 2 and 3.  We then started the soundwork, which was just as difficult.  I hired the best soundpeople to do the work -- Paul Ottosson, who I had worked with on the Spidey movies and who had been nominated for an Academy Award; Robert Troy, the dialogue editor, and John Sanacore, the foley artist, both from The Hurt Locker; and Marti Humphrey and Brad Semanoff, who had done the sound mix on Drag Me to Hell.  There were numerous problems with the sound, but through the skill of the sound crew, who employed all the newest, most state-of-the-art digital technology, we created a great soundmix for the film last summer.  The final step was scanning all the original camera negative and doing full restoration at Fotokem Lab in Burbank.  Over 1000 hours were spent cleaning up the picture, removing dirt and camera scratches.  The color and density were graded by ace colorist Alastor Arnold over a period of 4 months.  Additional work was done at HTV/Illuminate to restore sharpness as much as possible to some out of focus shots.  Finally, about two weeks ago, we filmed out the negative and saw a complete 35mm print. 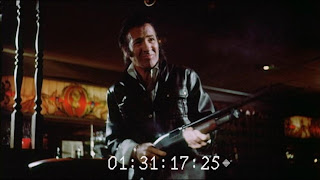 CA:  Gone with the Pope's premiere is the same week as the Academy Awards (Bob and his wife Chris Innis are nominated in the Best Editing category for their work on The Hurt Locker). Which one are you more excited about?
BM:  It's an honor to be nominated for an Academy Award after over 20 years working in the movie business, but I must admit I'm even more excited about the premiere of Gone with the Pope.  That movie was 35 years in the making!
CA:  What can fans expect from the DVD releases of Pope and Massacre Mafia Style? 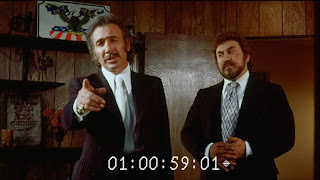 BM:  The utmost in picture and sound quality as well as great packaging with all the exhaustive extras you have come to expect from Grindhouse Releasing.  However, we feel strongly about the theatrical experience, so we will be trying to book the movies in as many cities as possible.  Watch for them, coming soon to a theater near you!
CA:  Any other Grindhouse Releasing news worth discussing?
BM:  An American Hippie in Israel is coming up; we did a beautiful new HD transfer and have incredible, in-depth interviews with stars Asher Tzarfati and Schmuel Wolf that we shot in Tel Aviv earlier this year.
Thanks, Bob.  For more information on theatrical screenings of Gone with the Pope, check out its official website.  For more on Grindhouse Releasing, click here.
© 2010 -- Bruce Holecheck. All Rights Reserved.
Posted by bruce holecheck at 11:01 PM 3 comments: