It's Name that Movie Monday! Challenge #23!

Welcome back to Name that Movie Monday!
It's time for Challenge #23 here at the ol' Arcana! Can you identify this week's mystery photo, scanned direct from The Holecheck Archives? If you think you recognize it, post a comment below. As the week goes on, if no one guesses correctly I'll begin adding some pretty useless hints. Easy, right?
Here ya' go -- good luck! 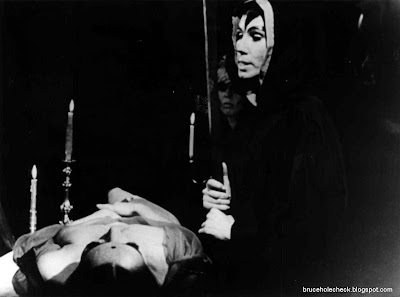 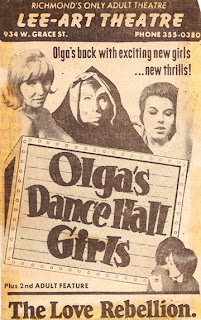 I guess I’m just not making these hard enough!
Congrats to Todd Bridges, who ties things up at four by whipping Olga’s Dance Hall Girls

(1966). This anonymously-directed fifth and final entry in George Weiss’ popular S&M-flavored series strays a bit from the blueprint laid by its predecessors, shifting the action to the suburbs where housewives are being pushed to boogie down with some shifty clientele. However, the gang’s true purpose is soon revealed as a front for a satanic cult specializing in human sacrifice! While certainly no classic, fans of NYC’s roughie movement will find some worth in Olga’s Dance Hall Girls. Audrey Campbell is sorely missed in the titular role, but at least sexploitation vet Larry Hunter shows up to keep the sleaze cranked to an appropriate level, and smaller roles are played with familiar faces like Linda Boyce and Uta Erickson. Plus, who can take umbrage at underwear catfights?
Gaining theatrical distribution in 1966 from sleaze merchants American Film Distributing Corporation, it received some surprisingly belated Canadian playdates as late as 1973 courtesy of Cinepix. Passed over for VHS release during the format’s boom years, it was considered lost until personal heroes Something Weird Video found the film’s original negative and issued it to tape in 1997. 2003 saw the Girls get a digital makeover on DVD as part of an Olga Triple Feature, partnered with earlier entries White Slaves of Chinatown and Olga’s House of Shame, which naturally comes highly recommended. 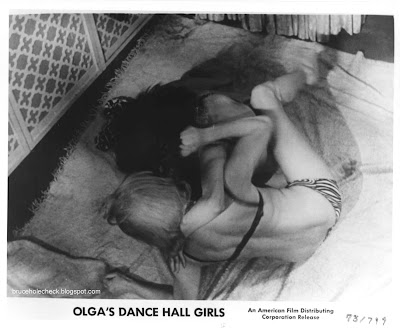 For a look at our last entry, click here. All of our past Challenges have now been solved, but we still have quite a few unidentified Grab Bag photos, if you really want to show your stuff. And don't forget, our Upcoming Releases List (the best on the 'net) is constantly updated, so stop by and preorder some cool stuff!
© 2011 -- Bruce Holecheck. All Rights Reserved.
Posted by bruce holecheck at 7:39 PM