It's Name that Movie Monday! Challenge #20!


It's time for Challenge #20 here at the ol' Arcana! Can you identify this week's mystery photo, scanned direct from The Holecheck Archives? If you think you recognize it, post a comment below. As the week goes on, if no one guesses correctly I'll begin adding some pretty useless hints. Easy, right?
Here ya' go -- good luck! 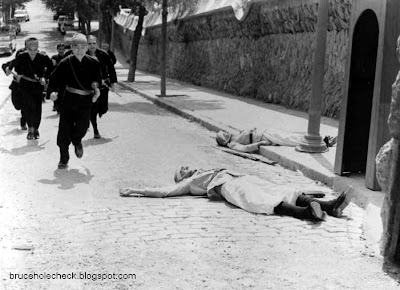 
Solved at last! After seven long months, our reigning champion has finally been identified! Thumbs up to "docvoltage" for recognizing Jess Franco's The Castle of Fu Manchu (1969). The fifth and final entry in Harry Alan Towers' series of pulp adventures featuring Christopher Lee as the titular villain, this one details a preposterous plotline involving heart transplants, frozen oceans and the usual world domination attempts. Not a great film by any stretch, it's still fun enough Saturday afternoon filler, and is helped a bit in the eye candy department by co-stars Rosalba Neri and Maria Perschy, who pretty much steal the show.

Belatedly hitting U.S. screens in 1972 courtesy of International Cinema Corporation, as compared to the Warner Bros.-handled earlier efforts, it didn't exactly light the box office on fire and producer Towers has been quoted saying director Franco effectively killed the series. Obscure label Electric Video Inc. released the film to VHS in 1981 with silly cover art and a transfer that didn't do many favors to its already-questionable reputation. In 2003 Blue Underground performed a minor rescuing act and dropped Castle and its immediate prequel The Blood of Fu Manchu in their Christopher Lee Collection box set, which also house the superior Circus of Fear and a restored uncut The Bloody Judge. All four films look great, are complete, and are packed with a wide array of supplements including featurettes, stills collections, commentaries, trailers, etc. It's well worth picking up. 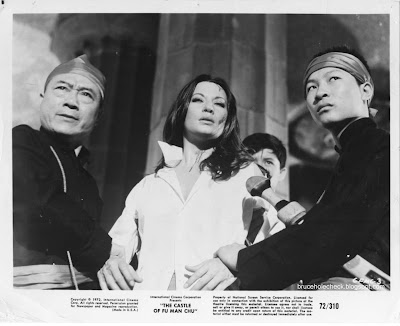 VHS cover courtesy of Jayson Kennedy's Basement of Ghoulish Decadence.
For a look at our last entry, click here. And don't forget, our Upcoming Releases List (the best on the 'net) is constantly updated, so stop by and preorder some cool stuff!
© 2010 -- Bruce Holecheck. All Rights Reserved.
Posted by bruce holecheck at 11:46 PM