It's Name that Movie Monday! Challenge #8!


It's time for Challenge #8 here at the ol' Arcana. Can you identify this week's mystery photo, scanned direct from The Holecheck Archives? If you think you recognize it, post a comment below. As the week goes on, if no one guesses correctly (which hasn't been a problem lately...) I'll begin adding some pretty useless hints.  Easy, right?
Here ya' go -- good luck! 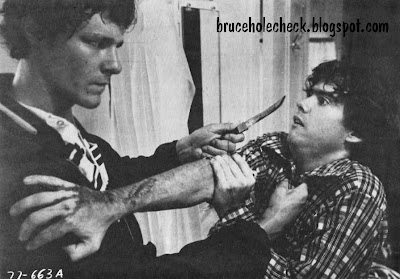 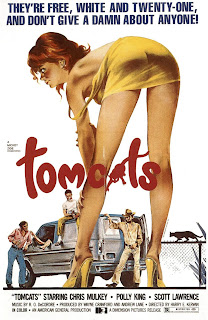 (1976) in ten minutes flat!  (And here I was thinking this would be a tough one...)
The film, a financial follow-up by the Kerwin Bros. to their prior year's slaughter-in-the-sticks outing God's Bloody Acre

, is a mean and sleazy little effort detailing a brother's vendetta against the quartet of rapists who abused and murdered his waitress sister.  As expected, things get violent. 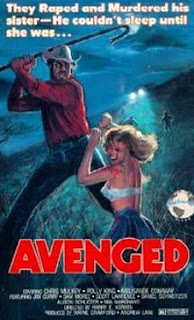 Distributed theatrically by Dimension Pictures in 1977 with an ad compaign that downplayed its rougher aspects, Tomcats turned up on VHS in 1985 from Continental Video under the much more fitting title Avenged

.  (Great cover art, too!)  Out of print for decades, a 35mm print was turned up by Something Weird Video in 2005 and they now offer it on tape and DVD-R.  While no mass market DVD is available, Code Red claim to have licensed the film but haven't been able to locate acceptable elements.  Hopefully they'll work something out, as the film is an unexpected treat for fans of '70s exploitation cinema and deserves a wider audience.
Here's the hilariously hyperbolic trailer! (Definitely not safe for work.)

(Since this post was originally written, Code Red did release Tomcats on DVD, double-billed with God's Bloody Acre.  You can find it at Amazon here.)

Poster image courtesy of Wrong Side of the Art.


For a look at last week's entry, click here. And don't forget, our Upcoming Releases List (the best on the 'net) is constantly updated, so stop by and preorder some cool stuff!
© 2010 -- Bruce Holecheck. All Rights Reserved.
Posted by bruce holecheck at 7:57 PM