It's Name that Movie Monday! Challenge #7!


It's time for Challenge #7 here at the ol' Arcana. Can you identify this week's mystery photo, scanned direct from The Holecheck Archives? If you think you recognize it, post a comment below. As the week goes on, if no one guesses correctly I'll begin adding some pretty useless hints. Easy, right?
Here ya' go -- good luck! 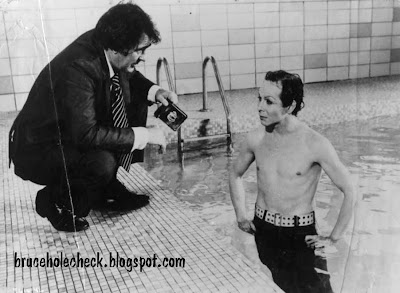 
Congrats go out to the man, the myth, Marty McKee, for identifying this week's challenge in a half-hour flat, smashing our prior record!  The still above is indeed from Alberto De Martino's Strange Shadows in an Empty Room

(1976), a surprising little gem with a killer cast (including Stuart Whitman, Tisa Farrow, John Saxon and Martin Landau) that doesn't get nearly the attention it deserves.  Known to the rest of the world as Blazing Magnum, this poliziotteschi (with some giallo trappings) features, as AIP's pressbook states, "one of the most breathtaking and destructive car chases ever seen on the screen," as well as, "a crashing helicopter, a transvestite crushed in a cement mixer, fights and falls from a skyscraper, and all sorts of shootings." 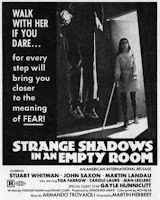 American International Pictures issued it theatrically in 1977, oddly playing up the thriller elements more than the action.  (To be fair, their publicity did devote some space to Whitman's stuntwork, along with his exercise regimen of handball and horseback riding...)  On VHS the title found release in the '80s from Vestron Video

, whose onscreen title dropped the word "Strange."
Unfortunately, the film is still lacking a proper DVD release; an unlicensed version turned up as part of VideoAsia's Grindhouse Experience, Vol. 2

set, but it's a crummy transfer a few generations removed from VHS.  We can only hope that one of the boutique labels will roll the dice and give it a shot.
I couldn't find the trailer online (even though I know I have it on a compilation somewhere; perhaps one of the Something Weird tapes?), but plenty of folks have uploaded the car chase!

For a look at last week's entry, click here. And don't forget, our Upcoming Releases List (the best on the 'net) is constantly updated, so stop by and preorder some cool stuff!
© 2010 -- Bruce Holecheck. All Rights Reserved.
Posted by bruce holecheck at 7:17 PM