A memorial, of sorts. 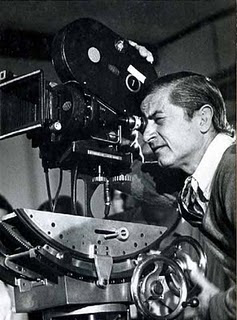 On January 25th 2010, news broke that Argentina’s genre groundbreaker Emilio Vieyra had passed away. His career as a director was all over the map, moving freely from noirish crime tales to action comedies and vigilante thrillers, but it was his quintet of crackpot horror outings that really opened the eyes of psychotronic students on U.S. shores–Stay Tuned for Terror, The Deadly Organ, The Curious Dr. Humpp, The Nude Beast, and Blood of the Virgins.
In my opinion, Vieyra’s current popularity in the English-speaking world is really due to the tireless efforts of two people: Frank Henenlotter and Pete Tombs. I thought it was only right to give this pair a platform to share their memories of the man who gave us all so many wonderful hours of hyper hypo needle attacks, pissed-off brains in buckets, el happenings & stripper murders, vampires who turn into seagulls, mad scientists and more.
In Pete Tombs’ essential 1997 ‘Mondo Macabro’ text, there's a chapter (written by Diego Curubeto) dedicated to Argentina’s exploitation film history, including plenty of space dedicated to Emilio. In 2001 this idea was fleshed out as part of Channel 4’s UK television series of the same name, including an interview with the director himself. Two years later, Blood of the Virgins was issued on British DVD, followed by a stellar US release in 2004.
Take it away, Pete: 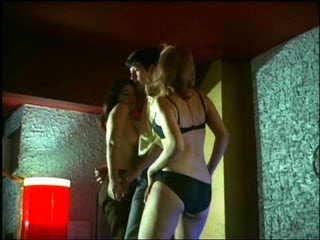 “I was very sorry to read of the death of Emilio Vieyra. He lived to the ripe old age of 89 and was still working right up to the end. That's the way to go. I have very fond memories of meeting him ten years or so ago when we shot the Argentine episode of the Mondo Macabro TV series. He was very generous with both his time and his memories of those long ago pioneering days of Argentinean exploitation cinema. Although some of the Argentine newspapers described him as "the local Ed Wood," I know that he was held in high regard by many of the technicians and actors he worked with on those early films, several of whom went on to become significant figures in Argentina’s film world. His films, like the man, were lively and inventive. El venganza del sexo is something of an oddball masterpiece when seen in its original Spanish cut -- a truly original piece of work that will continue to be enjoyed long after all of us have turned to dust and joined Emilio at that big cinema in the sky.”
Going back even further, El Culto de Vieyra really started in the early ‘90s, when Something Weird Video founder Mike Vraney and director Frank Henenlotter discovered the negative to The Curious Dr. Humpp during one of their now-famous exploitation excavations and unleashed it on an unsuspecting world. Thanks to Frank’s tantalizing catalog write-up, the film quickly became a bizarro must-see for fans of cinema arcana. Something Weird later also issued The Deadly Organ and Violated Love on VHS, and during the 2000s released Humpp and Organ to DVD, further widening Vieyra’s reputation as a Patagonian go-to for the weird and wonderful. 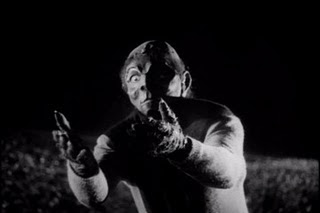 Here’s Frank, in his own words:
"Though I’m now a little fuzzy on the exact date and location, I still vividly remember the moment when I was prowling through the abandoned films left in an underground vault by a lab that had otherwise vanished and saw a row of cans marked “The Curious Dr. Humpp.” It was not a film I saw when it played Times Square in 1970, but there it was, orphaned and forgotten, and just begging me and Mike Vraney to pick it up and give it a home.
"I also vividly remember the first moment I watched it, utterly blown away by its heady mix of monsters, sex, and a talking brain in a jar with a bad attitude. The Curious Dr. Humpp quickly became one of the jewels in my “Sexy Shockers from the Vault” series released through Something Weird Video, and also my link to the man who made it, the Argentinean director Emilio Vieyra.
"A prolific director of Argentinean exploitation, Vieyra noticed the lack of fantastic films made in his country and, in the late 1960s, churned out five quirky gems back to back. One of them was La Venganza del Sexo, in which crazy Dr. Zoide’s sex experiments turn women into insatiable nymphomaniacs and men into stone-faced automatons. In one utterly delirious moment, one of those funny-faced robots is sent to the pharmacy to pick up a prescription causing the brain in the jar to angrily scold the doctor: “Anyone needing drugs doesn’t send a monster to a drug store!” (Director Vieyra can be glimpsed as a customer in the same drug store.) 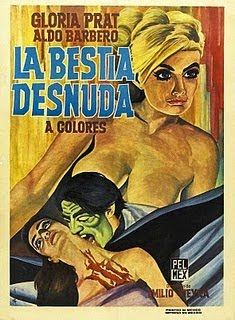 "Venganza del Sexo was imported into the U.S. by sexploitation distributor Jerald Intrator whose specialty was shooting sex scenes in New York and splicing them into foreign films. Though Venganza already contained a healthy amount of skin, Intrator added 17 more minutes of sex inserts and changed the title to The Curious Dr. Humpp, which wasn’t a reference to the doctor’s inquisitive nature, but rather meant to echo I Am Curious (Yellow) which was then a box-office sensation.
"Shortly after Something Weird released Dr. Humpp on VHS, I got word that Emilio Vieyra was coming to New York and would like to meet me. I jumped at the chance and, though his English was bad and my Spanish was non-existent, we became friends. On a few more occasions when he was in Manhattan on business we would have dinner or breakfast together. A mild, dignified man with a sly sense of humor, he was a delight to know.
"He was also thrilled that Venganza was getting a new lease on life. Pretty much ignored on its Argentinean release, Vieyra was thrilled that this crazy American cult director was championing his baby and often mentioned me and Dr. Humpp in interviews back home (though he was not terribly thrilled with the added inserts).
"Emilio also gave me posters, stills, and copies of his other horror films. Extraña Invasion (Stay Tuned for Terror) is about mysterious signals emanating from television broadcasts which turn viewers into TV addicts. It stars Richard Conte and Vieyra himself as a deranged TV repairman. Sangre de Virgens (Blood of the Virgins) offers sexy bloodsucker Susan Beltran preying on a ski resort, with Vierya playing a police inspector. Placer Sangriento (The Deadly Organ / Feast of Flesh) is about a man in a monster mask who uses heroin and a strange tune on a record to turn women into love slaves. And the wonderful La Bestia Desnuda (The Nude Beast) is a wild, '60s-style thriller about another man in a monster mask killing off members of a theatrical troupe putting on a horror musical. Vieyra plays the show’s director with Aldo Barbero, Dr. Humpp himself, as the hero. 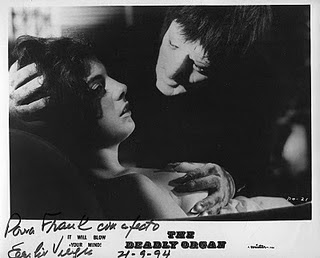 "I also enjoyed many of Vieyra’s other exploitation films and, of course, I enjoyed the man himself. I’m sorry to learn that he passed away at, I believe, the age of 89.
"In tribute, tonight I shall watch Dr. Humpp yet again, then La Bestia Desnuda for an all Emilio double bill."
Much obliged, Pete and Frank. Now what do we have to do to get The Nude Beast on DVD?
If you're unfamiliar with Emilio Vieyra's body of work, here are a few helpful links to get you up to speed: 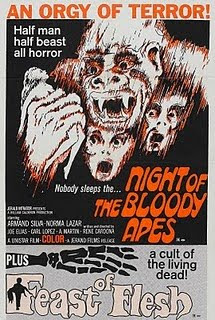 on DVD as Feast of Flesh, paired with the mindblowing Night of the Bloody Apes

on DVD. (One of my Top Ten of 2004!)
Frank Henenlotter's newest, the excellent Bad Biology

Emilio's old website.
Some of the above images were stolen from Wrong Side of the Art.
© 2010 -- Bruce Holecheck. All Rights Reserved.
Posted by bruce holecheck at 12:51 PM