It's Name that Movie Monday! Challenge #12!


It's time for Challenge #12 here at the ol' Arcana! Can you identify this week's mystery photo, scanned direct from The Holecheck Archives? If you think you recognize it, post a comment below. As the week goes on, if no one guesses correctly I'll begin adding some pretty useless hints. Easy, right?
(Or not so much? We now have two unsolved challenges: last week's Challenge #11, a movie I guarantee everyone who reads this blog has seen, and Old Faithful herself, Challenge #9.  Hints have been added to both posts; give 'em another look, wrack your brains, and see what you can come up with.  I may end up posting another photo to #9; unfortunately, I think my other three stills are all dead giveaways! I will say it's not a sexploitation flick...)
Anyway, here ya' go -- good luck! 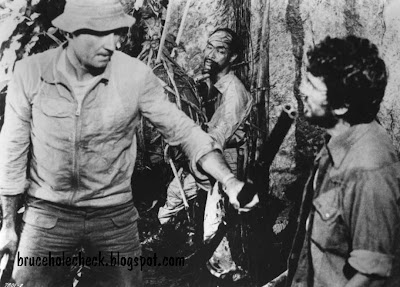 (1977).  Probably the best of Italy's short-lived slew of cannibalism gross-out epics, this "true account of the series of events" details the struggles of an industrialist trapped in the titular foliage who becomes captured by a primitive tribe of flesh-munchers. Much more an adventure outing than its atrocity-minded bloody brethren, Deodato's film still doesn't pull its punches and remains recommended viewing due to his deft direction and compelling storyline.
Released theatrically in 1978 by United Producers Organization under the title The Last Survivor and later reissued as Carnivorous (usually paired up with Gary Sherman's Raw Meat

), the movie fell victim to censorship practically everywhere it went. No surprise, really, considering its continuous nudity (female and male -- sometimes in close-up) and continuous violence (torture, dismemberment, rape... and a fun scene where a woman feeds her newborn to a crocodile); I once caught a 35mm print as Last Cannibal World that was relieved of practically all its highlights!

In 1985 Video City Productions dubbed the film Jungle Holocaust for their VHS issue, trying to ride the coattails of Cannibal Holocaust's then-current theatrical dates, I suppose. The tape was finally uncut, but unfortunately cropped to fullframe from its original scope framing.  Years later another VHS tape made the rounds, this time from Saturn Productions under the name Cannibal, and while it presented the film in a less-compromised aspect ratio (around 1.85:1), it was regrettably struck from the British 'X' print and was missing the good stuff. The situation didn't get any better overseas, and as far as I know there was never fully ltbx, fully uncut VHS release.
And then came DVD.  In 2001 Media Blasters finally presented Jungle Holocaust right as part of their Shriek Show line, completely uncut in its 2.35:1 ratio, packed with supplements including director's commentary, interviews with stars Massimo Foschi and Ivan Rassimov, trailers, stills... hell, they even included miniature lobby card reproductions! Of course, that was almost ten years ago; how 'bout a remastered Blu-Ray, guys?!

For a look at last week's entry, click here. And don't forget, our Upcoming Releases List (the best on the 'net) is constantly updated, so stop by and preorder some cool stuff!
© 2010 -- Bruce Holecheck. All Rights Reserved.
Posted by bruce holecheck at 8:47 PM