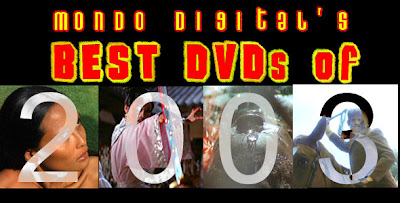 The Mondo Digital mainpage was recently given a cosmetic overhaul, and in addition to its new look several older articles have been restored.  One such piece was a round-up of 2003's best DVDs that I compiled, with input from writers like Nathaniel Thompson, John Charles, Travis Crawford and Lee Williams.  I have included my contribution below, spruced up with some images and links.  Be sure and check out the original page linked above for the other writers' lists.  For purchasing links, just click the titles!

(Anchor Bay)
Here's one I've been rooting for ever since Anchor Bay's initial New World catalog acquisition -- an outlandish and gory futuristic updating of The Most Dangerous Game replete with multiple severed appendages, hyper werewolves in cross-country vehicles, hilarious political ramblings and Steve Railsback!  Usually disemboweled, this Aussie action flick amazingly turns up as a packed special edition showcasing a resplendent uncut transfer, an active sound remix, featurettes, commentary, trailers and more.  Who would have ever guessed?

(Synapse)
Sleazy art?  Arty sleaze?  Something in between?  Now you can decide, thanks to Synapse's gorgeous debut of this bizarro slice of violent nunsploitation.  Impossible to find a good copy prior (complete tapes were fullframe and ltbx tapes were cut) and never even released to home video domestically, we can now view the classiest "naughty nun" flick of 'em all in virtually pristine condition.  Not much in the way of additional items (save an interview with starlet Florinda Balkan and a stills gallery), but it's the movie that really counts.
(Note: Since this initial writing, the film has been reissued on Blu-Ray by Scorpion Releasing.)

I DRINK YOUR BLOOD

David Durston's rabid hippie contagion classic finally lands on disc, and it's a doozy.  Aside from the remastered presentation of the main feature, Grindhouse have packed nearly every nook and cranny of this platter with some sort of supplemental material; it's enough to keep you busy for days.  Interviews, commentaries, photo collections, trailers and items that are just peripherally related to the film or its crew are included just for the sake of completeness.  All hail S.A.D.O.S.!

LONE WOLF AND CUB: BABY CART AT THE RIVER STYX

(Animeigo)
The epic tales of exiled executioner Ogami Ito are making their way to U.S. DVD after much delay, and let me tell ya', it was more than worth the wait.  Not only are the films (which detail the revenge-fueled exploits of samurai and child across feudal Japan) pure poetry in motion, but Animeigo's restored transfers take on an almost 3-D sheen that will steal your breath with every slow-motion spray of arterial crimson.  I picked the second entry of the series simply because I like its title more, but ALL are highly recommended.  No extras except for trailers and liner notes, but who cares?
(Note: Since this initial writing, Animeigo has upgraded the series to Blu-Ray.)

Corpse-humpin' never seemed so sweet.  This strangely poignant and morbidly romantic account of the darker sides of human desire remains provocative viewing to this day, which shouldn't be a surprise considering it was purposely designed to alienate horror fans.  Never an outfit to skimp, Barrel have gone all out with its digital issue, not only delivering a beautiful transfer and loading on piles of sublime extras like outtakes, onset footage and commentaries, but also including the entire soundtracks to both installments on a bonus CD!

(Sub Rosa)
To be frank, most independent films these days are total crap.  And do we really need another homemade serial killer opus?  Apparently yes, we did.  Believable acting, unexpected twists, inspired (but not showy) direction and a complete refusal to pull any punches whatsoever catapult this one way above its peers.  The end product is undeniably perverse, brutal and often hard to watch, but that's what makes it such an atypical surprise in a genre full of stale efforts.  Sub Rosa's DVD contains plenty of input from the makers by way of commentaries and behind-the-scenes footage, too.
(Note: Since this initial writing, the film has been reissued by Image Entertainment.)

Simply the most delirious piece of Eurotrash I've seen in years.  Reminiscent of Jean Rollin on speed, this former obscurity never fails to entertain, from its ridiculous storyline to its infectious score to director Michel Lemoine's jaw-droppingly insane turn in front of the camera.  In addition to a new transfer from the last film elements known to exist, Mondo Macabro includes a well-made interview segment, a trailer and a few informative text essays, but they're merely the icing on the cake with this newfound gem.

(Something Weird/Image)
The hilariously misogynistic misadventures of one-eyed woman killer Richard Jennings get new life thanks to this wonderful collaboration between Something Weird and Image.  Possibly the most berserk films ever made, Michael and Roberta Findlay's grungy masterpieces of anti-female sentiment have never looked so sparkling and established fans will be thrilled to find additional footage, too!  While completely bereft of the bonus materials SWV are usually known for (there wasn't any room!), this trashy trilogy is still sure to destroy any relationship you're currently in.  "So long, sucker!"

A VIRGIN AMONG THE LIVING DEAD

(Image)
Long seen only in horribly bastardized versions, Jess Franco's moody fever dream is now available in what can at last be considered its definitive presentation.  A personal, surreal and lyrical mediation on the uncertain nature of death that will undoubtedly frustrate some but fascinate followers with its poetic vagueness, this is not your usual Franco outing.  Bruno Nicolai's rhythmic, driving score only adds to the film's disorienting appeal.  Challenging, but rewarding.  Besides the superior French language option, Image also presents a trailer with exclusive footage and a collection of alternate takes and insert sequences.
(Note: Since this initial writing, Redemption has issued an excellent special edition on Blu-Ray.)

(Mondo Macabro)
Revenge of the Ninja