It's Name that Movie Monday! Challenge #15!


It's time for Challenge #15 here at the ol' Arcana! Can you identify this week's mystery photo, scanned direct from The Holecheck Archives? If you think you recognize it, post a comment below. As the week goes on, if no one guesses correctly I'll begin adding some pretty useless hints. Easy, right?
Here ya' go -- good luck! 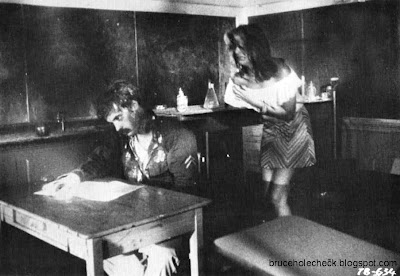 
Congrats to William Wilson, who ties it up at three by identifying this week's flick as Constantine S. Gochis' The Redeemer: Son of Satan

(1977). An oddball proto-slasher with quasi-religious leanings, the film tells of a high school reunion gone bad, as six returnees are whittled down in numbers by a costume-changing killer with a pretty straight-line view about sin. A strange and sometimes confusing outing, The Redeemer is nevertheless one of those rare gems that succeeds more on vibe and atmosphere than logic. Give it a shot with an open mind and you should find a lot to like.

(Writer William Vernick once told me even he didn't know what was going on for most of it.  The additional thumb subplot was brought about by the producer, who traced his hand on a copy of Bill's script, added the extra phalange and said, "Put this in there!" Maybe I'll need to throw together an interview...)

Submitted for MPAA approval in 1977, Dimension Pictures didn't actually release the film theatrically until 1978 in an attempt to steal some publicity from that Summer's official Omen sequel.  The company's typically misleading ad campaign highlighted a Damien-esque kid with the phrase "First 'The Omen'... Now 'The Redeemer'" above his head. At home, Continental Video popped out a nice version on VHS in 1985 as Class Reunion Massacre, the title the film is most commonly assocatiated with. Later (and rarer) tape editions from VCI and Genesis reverted back to the film's original moniker.
Aside from some bootleg DVD appearances, that's been it for the last 25 years -- until now. Code Red recently gave the film a new digital transfer from a 35mm print (reportedly the source is a little beat up, but I'll take a new 35mm transfer over a decades-old tape master any day!) and it's streeting next week! Hopefully this time around it'll find its audience.
For an interview with star T.G. Finkbinder, check out Justin Kerswell's Hysteria Lives!
The newspaper ad comes courtesy of Temple of Schlock.
For a look at last week's entry, click here. And don't forget, our Upcoming Releases List (the best on the 'net) is constantly updated, so stop by and preorder some cool stuff!
© 2010 -- Bruce Holecheck. All Rights Reserved.
Posted by bruce holecheck at 11:38 AM