It's Name that Movie Monday! Challenge #4.


Are you ready for Challenge #4?  The rules are simple:  take a gander at this week's photo, scanned direct from The Holecheck Archives.  If you think you know the film it's promoting, leave a comment below.  As the week goes on, if no one guesses correctly I'll begin adding some pretty useless hints.  Easy, right?  Last week's was identified in under two hours; let's see if we can beat that record!
Here ya' go -- good luck! 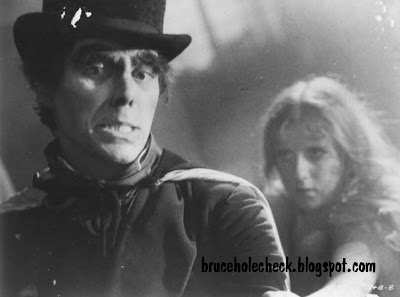 
Congrats go out to Bryan Senn for guessing this week's mystery film as Andy Milligan's Jeckyll & Hyde-inspired brain-melter, The Man with Two Heads

(1970).  While not as deliriously skewed as the best of Milligan's output, it's still a worthwhile endeavor that fans should cherish; the director's venomous worldview is especially on display as the above-pictured loony verbally berates and mutilates various Soho hookers.
Shot in 1970, producer William Mishkin kept it on the shelf until '72, when his William Mishkin Motion Pictures Inc. released it on a double-bill with Andy's The Rats are Coming! The Werewolves are Here!  The outfit didn't show much confidence in the film, either; the combo pressbook states, "... The Rats are Coming is a better box office title [and] should always be featured first, and preferably be given more space than Man with 2 Heads."  It's an opinion I completely disagree with; Rats is a snore compared to the maniacal Mr. Blood. 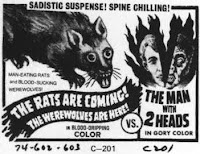 A decade later Man saw VHS release through Select-A-Tape's Midnight Video genre arm (not to be confused with the bootleg outfit) as one of only eight titles.  Unfortunately, it has never made the jump to DVD, and at this point I can't imagine it ever will.  For those not wanting to spend collector prices for the old prerecord, exploitation saviours Something Weird Video have kept the film in circulation on VHS and DVD-R. 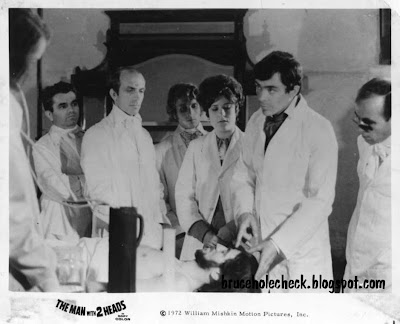 For a look at our previous entry, click here.  Also keep an eye peeled for additional randomness coming soon, including reviews of Gone with the Pope and Herschell Gordon Lewis: The Godfather of Gore, my Top Ten DVDs of 2008 and more!
And don't forget, our Upcoming Releases List (the best of its type online, if I do say so myself) is constantly updated; swing by and preorder some cool discs!
© 2010 -- Bruce Holecheck.  All Rights Reserved.
Posted by bruce holecheck at 7:47 PM