Everybody having a good time?  Just a quick note to comment on some recent items.

It seems like The VHS Archives project is being received well; reaction has been very positive to Project: MOGUL, so I guess I'll keep it going.  I've been updating past posts with foreign tape sleeves as readers have been submitting them (or as I've stumbled across them online), so be sure and give the old pages another look if there's a favorite of yours.  Additionally, if anyone out there has an alternate tape scan they'd like to contribute, feel free to get in contact -- the more, the merrier!  Are there any other outfits you guys would like to see tackled?  I'm going to start mixing in some IVC titles soon, along with a few other odds & ends that may not ever see full-on label pages.

In DVD news, this Summer will see the release of two titles I contributed to.  First on the docket is Panik House's long in the works Women in Prison Triple Feature

, containing the sleaze classic Chained Heat (1983) in a version with plenty of never-before-seen skin and gore, its chicks-in-chains follow-up Red Heat (1985) and the cult star-palooza action epic Jungle Warriors (1984).  I got involved with the project years ago when Panik House was still an actual company, though the only thing that remains of my involvement now is an interview with Sybil Danning for Chained Heat.  I conducted the chat in Los Angeles a while back and she was an absolute delight to sit down with.  Hopefully you get a kick out of it!  (We also discussed Jungle Warriors, but that section of the chat now seems M.I.A.  Ditto with the stills collections.  And for those of you wondering why Linda Blair isn't on the disc, her price was pretty outrageous.  A shame, too, as the phone conversations I had with her about the film were hilarious!)

(1973), coming to DVD and Blu-Ray in August.  For this one, I scanned a bunch of my photo negatives, which includes a few shots I haven't seen printed anywhere before.  Granted, some of them came out much nicer than others (I guess I should really spring for a proper negative scanner!), but overall I think it's an interesting addition to the disc.  Thanks go out to DVD producer Greg Chick, who also wrangled up quite a bit of extra stuff for the gallery.  The release will also include a new interview with the director, conducted by [Warning: Gratuitous Segue Ahead!] Ultra Violent Magazine's Art Ettinger.  Which brings us to...
...The new issue of Ultra Violent!  I didn't write anything for it, but my history with UV goes back quite a few years, so I have no problems pimping their wares.  Issue #11 runs 112 pages, and has in-depth articles and interviews with Ray Sager, Lynn Lowry, Geretta Geretta and tons more.  You won't regret grabbing a copy!  Visit their website here. 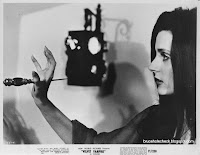 Going back through the Arcana's files recently I realized I did an interview with Shout Factory's Cliff MacMillan about their line of Roger Corman's Cult Classics that I never posted!!  (Don't even ask.)  I hope to get it updated and post it sometime over the next month or so.  Then there's the Top Ten of 2010 I got sidetracked from and really need to finish!
While we're on the Shout Factory subject, they have so much good stuff coming out it's sick, including an awesome Pam Grier Women in Cages triple-bill 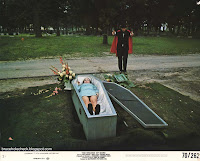 Genre saviors Something Weird Video are finally back to wide-release activity with three extremely noteworthy items:  blu-rays of H.G. Lewis' The Blood Trilogy

(1982), and the home video premiere of their in-house production, Godfather of Gore: The Herschell Gordon Lewis Documentary

(2010).  Pre-order price for all three is extremely cheap, so grab 'em at these rates while you can.  I think it's great to see them back in the game; hopefully this leads to more and more!  (I'm greedy.)
Media Blasters have staged a coup of my heart with their announcement of two important (seriously!) blu rays:  Burial Ground

(1980).  Years back I put together a personal roster of Top Ten Eurotrash Essentials for pal David Zuzelo's Tomb It May Concern blog;  both titles were rightfully on there.  To me, this pair perfectly sums up everything I love about bizarro films, and to have them both in hi-def is a dream come true.  To sweeten the deal, the company recently reported that they'll be including a silent reel of outtakes and trims that the licensor supplied for Burial Ground!  After all these years, the chance to see some additional snippets really has me excited!
Lastly, as always, the Upcoming DVD and Blu-Ray Releases of Note list is constantly updated, so be sure to swing by and pre-order some cool stuff!
Until next time!