It's Name that Movie Monday! Challenge #21!


Welcome back to Name that Movie Monday!
It's time for Challenge #21 here at the ol' Arcana! Can you identify this week's mystery photo, scanned direct from The Holecheck Archives? If you think you recognize it, post a comment below. As the week goes on, if no one guesses correctly I'll begin adding some pretty useless hints. Easy, right?
Here ya' go -- good luck!

(1968). As their motto goes, "We don't owe nobody nothin' and we don't make no deals! We're swingin' chicks on motorbikes and maneaters on wheels!" Add in some splashy violence, groovy garage rock and hilariously quotable dialogue (including the legendary "Go fumigate yourself, craphead!") and you have a guaranteed night's entertainment.
Originally released to theaters ("in Blinding Color!" according to the promotional materials) by Mayflower Pictures, Inc., the film was later picked up by AIP as a co-feature for Billy Jack, of all things. What a night that bill would've been! At home, She-Devils on Wheels received a 1985 VHS release from World Video

once its rights were bought up by Jimmy Maslon's Shock Films, who reissued it themselves in 1990 as part of their incredible 'Sleaziest Movies in the History of the World' series hosted by Joe Bob Briggs. Shock then worked out a deal with Something Weird Video, and that's where it's resided since. Their DVD looks great and comes with a fun commentary, stills collection, trailers and more, so get on the road! 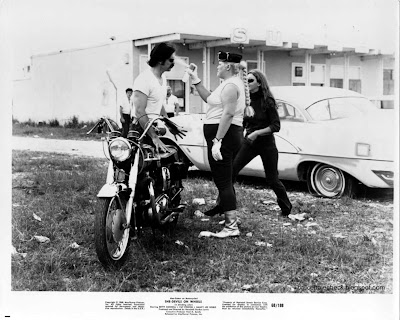 For a look at our last entry, which has remained unsolved since December(!), click here.  We also have quite a few unidentified Grab Bag photos, if you really want to show your stuff.  And don't forget, our Upcoming Releases List (the best on the 'net) is constantly updated, so stop by and preorder some cool stuff!
© 2011 -- Bruce Holecheck. All Rights Reserved.
Posted by bruce holecheck at 5:45 PM