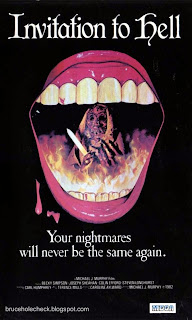 A beautiful young girl accepts an invitation to a party of a former college friend held at an isolated house in the country.
Unbeknown to her a dark evil force is lurking with it's walls -- controlling the lives of the other inhabitants.
Lured into their satanic web she discovers that she is to become a virgin sacrifice to quench the eternal lustings of the evil being.
Alone and powerless against her tormentor, in a struggle to survive she stumbles across the key to the malevolent force.  Is it too late to use it and escape her Invitation To Hell? 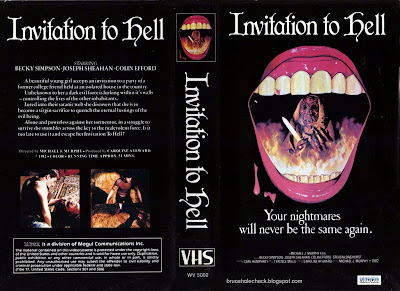 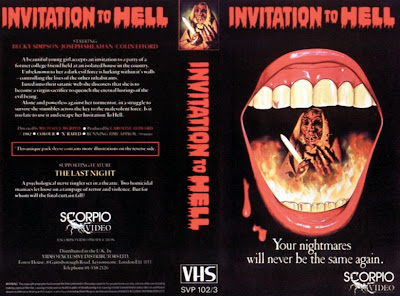 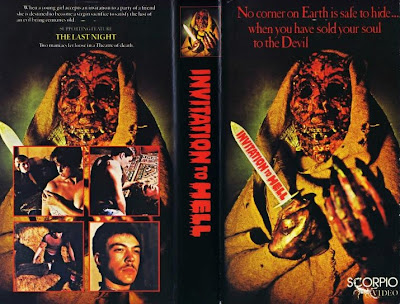 U.K. Scorpio Video reverse sleeve!
﻿
DVD trailer, uploaded by Sarcophilous Films!
Looking for Invitation to Hell on VHS?  It's available on Amazon here, though the picture listed is actually the Videoline release.  Buyer beware!  Anyway, you're much better off grabbing the Sarcophilous Films DVD; it features a new transfer, some extras and it's paired with Murphy's The Last Night to replicate its original U.K. VHS release!
Investigate more titles with Project: MOGUL!
For a look at other labels, check out The VHS Archives!
© 2011 -- Bruce Holecheck. All Rights Reserved.
Posted by bruce holecheck at 12:06 AM