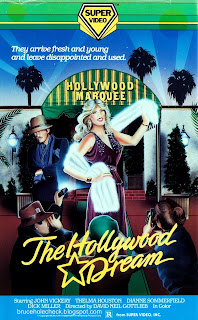 Verbatim Box Synopsis
Dozens of gorgeous but naive young women move to Hollywood in search of stardom. They sign on with a talent agency that promises them their "big break."
Roger, the president of the agency, uses his power and charm to seduce the girls and fulfill all his sexual fantasies. A young writer for the agency discovers the swinging activities and decides to have an affair of his own with one of Roger's prize clients.
The star-struck lovelies all parade through Roger's bedroom giving him sexual favors in exchange for fame. They soon realize he's exploiting them when their bodies are used as prizes in a wild game show orgy! 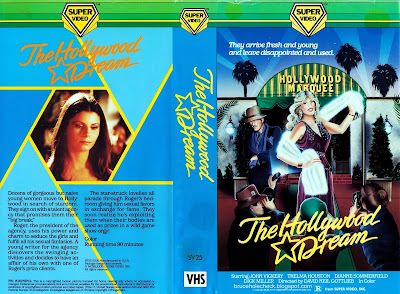 Looking for The Hollywood Dream on VHS? It's available on Amazon here. An even better bet is the excellent DVD release from Vinegar Syndrome; transferred from the original negative, it contains both Sam Sherman's sexed-up Game Show Models reedit and the original, hardly-seen The Seventh Dwarf assembly, along with director's commentary, outtakes and more!