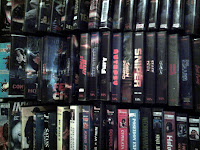 I'm not sure when my obsession with Mogul's VHS releases started.  I'm not even sure what the first one I ever purchased was, but I can remember the excitement of coming across a new, previously unknown title at some creaky backwoods video store or pawn shop.  Information was practically nonexistent, and the lists below were compiled the old-fashioned, pre-internet way:  wasting lots of gas finding every video store in the surrounding states and begging, bribing and sometimes stealing for them.  Classics are few and far between in the Mogul Communications line-up (not Mogul Video, as they're ofttimes incorrectly referred), but the rarity of their tapes and the obscurity of their titles, not to mention their typically outlandish, garishly-painted artwork, never fail to capture one's imagination.  Hilariously, some of their covers include the following disclaimer in small print across the back:


The scenes depicted on this sleeve may be an artist's impression & may not necessarily represent actual scenes from the film. 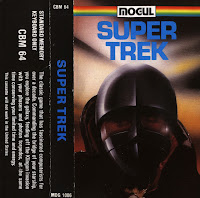 You gotta love 'em.  Mogul's lineage can be traced overseas to the U.K., where in '83 they were set up as yet another VHS arm by GO! Video's Des Dolan. Interestingly enough, Mogul Communications' name and logo wasn't only devised for home video use, as the company simultaneously issued a slate of video games under the banner. Not surprisingly, their games were essentially knock-offs of arcade hits, and included titles like Chomper Man, Kongo Kong and Pollywog. Fans of the label will notice artwork elements recycled from not only the U.K. Mogul tapes, but sometimes the GO! catalog and the video games, too!

As far as I know, in the States the outfit released around 70 titles on at least four different branches between '85-'88. Des Dolan's connection can explain the proliferation of films pulled from pal Dick Randall's holdings, along with other Brit associates like Michael J. Murphy. Ironically, Mogul is probably most famous for a movie they didn't release: Ruggero Deodato's Cannibal Holocaust. Their acquisition was announced, but the company went belly-up before their VHS was ever issued. Below are the tapes I've been able to track down.

I'll be frequently updating this list with links to each individual release, including cover scans, exact runtime information, alternate titles, etc. I also hope to do some related interviews, to shed a little light on the outfit. Keep checking back, or become a follower to ensure you don't miss anything!


Other Titles, Possibilities and “Iffys”:
Hostages, Terror of the She Wolf, Satan's Blade


If anyone out there has information regarding the gaps in this roster, including confirmation that Hostages and Terror of the She-Wolf actually exist, please get in touch! Also, I'm looking for prerecords of Fast Guns (Mogul) and Taste of Death (Mega). If you have copies for sale or trade, please let me know. I'm additionally interested in more information on Mogul's UK arm and its line of videogames.