In 1972 a plane full of passengers, including a college rugby team from Uruguay, crashes into the snowy mountains of the Andes. Many passengers are dead, others are bloody and wounded. One player steps out onto the soft snow and sinks into oblivion. Another guy’s guts are spilling out, so med student Raul (Pablo Ferrel) pushes them back in. The survivors line up the many dead bodies in the snow. They frequently pray the “Our Father” and “Hail Mary,” and make the “sign of the cross.” There’s very little food. They burn their cash for warmth. The injured moan constantly and keep the others awake. After a few weeks, Raul says, "We each must decide if we live or die.  The bodies in the snow can provide us with enough protein for a month."  Another player: "We must do what we must do."  Raul goes out to the bodies and tearfully slices off some fatty flesh from a dead guy. The survivors say the Rosary and line up to eat the gooey strips. One guy gags. Some gobble it. A guy forces it down his reluctant wife’s throat. One player refuses. ("I'd rather die!") Morale and strength pick up until an avalanche floods the plane and kills more people. The married guy makes the others promise that they won’t eat his now-dead wife. Some guy’s leg is black and infected so he slices into it with a razor and drains grey pus. Finally, the coach (Tintorera's Hugo Stiglitz) and two of the players stuff bags with shredded flesh and set out with makeshift goggles and boots to find help. 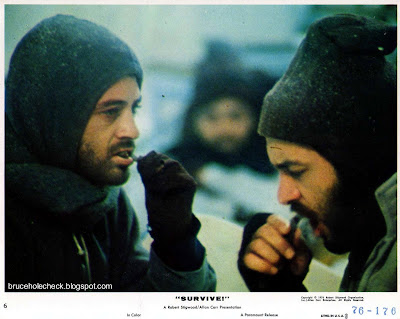 During Christmastime of 1975, the ambitious marketing genius Allan Carr was in Mexico promoting the movie Tommy for film producer/rock mogul Robert Stigwood. At a theater next to Carr’s hotel was a long line of people waiting to see something called Supervivientes de los Andes. Carr didn’t speak Spanish, but he was able to figure out that the crowd was buying tickets for a movie about a notorious 1972 plane crash that resulted in the snowbound survivors being forced to eat their dead fellow passengers.
Supervivientes de los Andes was a then-new epic directed by the tireless, 69-year-old Mexican exploitation legend Rene Cardona -- creator of bizarre worldwide hits like Santa Claus, Night of the Bloody Apes, and the “Santo” masked-wrestler movies. Rene Cardona, Jr. had produced the picture (entirely indoors) at the Churubusco studio in South America in early 1975. Second-unit long shots were filmed in the Colorado mountains. Despite the cheap production values and the laughably-fake snow, Supervivientes de los Andes turned out to be an efficient programmer with grisly images of spilling intestines, pus-oozing legs, and gooey human flesh getting sliced and gobbled.  (A shaved pig was used for some scenes.) Carr watched the film and thought it was terrible but he felt that a dubbed version would work in America. He convinced Stigwood to put up $500,000 to license worldwide, non-Spanish rights. Stigwood invested another $350,000 in Carr’s post-production. An English adaptation was written by acclaimed playwright Martin Sherman (Bent). Marshall M. Borden cut the new version. Many scenes (mostly those involving a search party) were dropped, others were tightened. The entire soundtrack was recreated from scratch. Veteran TV character actor Rudy Solari directed the new voices. Carr liked that the actors often had scarves over their mouths, which made the lip-syncing easier. Monotone narration was added. The sparse original score by Raul Lavista was replaced with one by Gerald Fried and recorded with a 50-piece orchestra. Footage from Disney’s In Search of the Castaways was licensed to enhance the lame avalanche sequence. Optical “haze” and “fog” were superimposed over the studio-shot sequences in an attempt to make the snow look more believable. Montages of black & white stills were placed at the film’s beginning and end. The new version ran 90 minutes. (The original was 112.) To mask the film’s pedigree, most of the Mexican cast and crew members’ names were buried at the end of the new closing crawl. (Only five of the over two-dozen actors were billed in this version.) 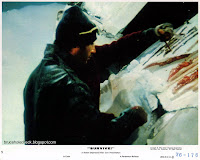 Stigwood saw the final result, now called Survive!, and hated it but he shared Carr’s box office enthusiasm until the film was turned down by every studio and distributor except American-International Pictures, who offered a weak deal. Executives from Paramount Pictures were the last to look at the film. They thought it was an embarrassment but they were desperate for something for their August 1976 slot. They offered Stigwood forty-percent of the profits and agreed to spend $850,000 on prints and ads.

Carr personally supervised the aggressive, in-your-face marketing campaign. Stigwood and Carr took a prominent “presentation” billing on the credits and ads. Some flesh-slicing and pus-draining was trimmed for an R rating. The lobby cards and promo stills included shots of the survivors drying the meat and eating it. The trailer ended with a freeze-frame of a knife cutting into flesh. All print and TV ads ended with: “CAUTION: The re-creation of the 1972 Andes plane crash and THE SURVIVAL SCENES may be too intense for young teenagers.” Carr told the press: “It’s the ultimate disaster picture. I hate to make a pun but the cannibalism is tastefully handled, almost as though it were a Catholic ritual…The audience for Survive! is the boys who want to have the girls grab them because they‘re so revolted by it all…The only thing that most people know about Mexican movies is Bunuel and Tijuana porno. This is something in between.”
Paramount opened Survive! on August 4 in 26 theaters. (The studio had originally planned to open Drum on that date until they dropped that Mandingo sequel.) Variety: “To say that Survive! is a disaster movie is not to categorize it but to describe it.” Roger Ebert: “Survive! is a fairly awful movie, but the essential heroism of its subject matter somehow emerges intact. That makes it a difficult movie to review you can’t just dismiss it with cheap shots, you have to deal with the fact that it does have an emotional impact. It’s not a good movie or even a very professional one, but it does respect its subject matter and so we have to also.” Frank Rich, New York Post: “a patently false snuff film that simulated the disembowelment of a woman for the audience’s erotic pleasure…The experience of sitting through it is so degrading it makes you want to rush home and take a shower.” (Carr sent roses to Rich after reading that review.) 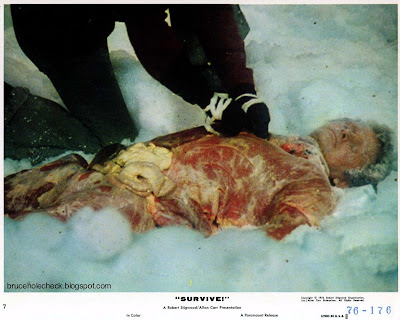 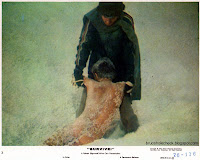 Survive! grossed $250,000 the first week and was #13 on Variety’s chart. By the end of the month, it had grossed $3.5 million and was #2 on the chart. Paramount ultimately had 400 prints in circulation and the film was #1 for one week in September and in the top 10 throughout that month.
United Artists wasn’t happy about the attention that Survive! was getting. Carr: “They’re very upset with me, they’re real mad.” In 1974 UA had paid a hefty sum for the rights to the bestseller Alive, which told the same story (with the participation of the survivors), and had planned a big-budget movie. William Goldman (Butch Cassidy and the Sundance Kid) wrote a treatment and fellow Oscar-winner John Schlesinger (Midnight Cowboy) was attached to direct, but the studio put their version on hold. (Paramount later teamed with Disney to finally make an Alive movie in 1993.) 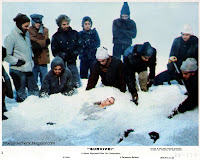 Stigwood alone invested the entire capital needed to license and revamp Survive! but Carr was his 50% partner for discovering the movie and for supervising the re-editing and promotion. Carr’s final cut came to over $1 million. He used part of his new-found cash to purchase the movie rights to Grease and used his new-found clout with Paramount to set that musical up at the studio.
Although it was a major studio summer hit, Survive! almost immediately sank into obscurity. Today, it’s a mostly forgotten curio and probably not fondly remembered by most who were duped into seeing it in the summer of ‘76. 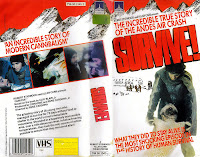 on region 1 DVD in 2003. Carr and Stigwood’s license on Survive! expired in 1996 and worldwide rights reverted back to the Cardona family. Paramount still has the elements for the American version in its vault. On October 11, 2011, VCI Entertainment will be releasing a DVD

containing both the original Mexican version and the Allan Carr cut.
*****************
Paul Talbot is the author of the books Bronson’s Loose!: The Making of the “Death Wish” Films

and Mondo Mandingo: The “Falconhurst” Books and Films