It's Name that Movie Monday! Challenge #26!

It's time for Challenge #26 here at the ol' Arcana! Can you identify this week's mystery photo, scanned direct from The Holecheck Archives? If you think you recognize it, post a comment below. As the week goes on, if no one guesses correctly I'll begin adding some pretty useless hints. Easy, right?
Here ya' go -- good luck! 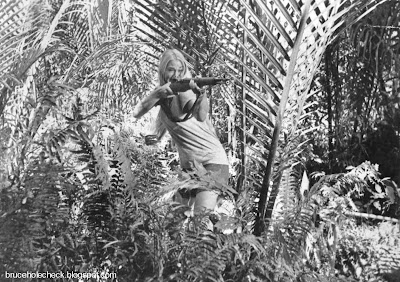 (1972) in five minutes flat! It's a sweaty tale of four American nurses on duty in a South American clinic who end up captured by "The People's Army" and are forced to tend the medical needs of their followers. Slowly but surely our quartet begin to believe in The Cause, but not until they've all popped their tops.

Shot in the Philippines like most Roger Corman-produced jungle actioners, The Hot Box is a calculated melding of two of New World's most profitable genres: their Nurse series and their Women-in-Prison outings. Featuring the usual mixture of sexy girls (including exploitation favorites like Margaret Markov and Laurie Rose), stuff blowing up, and a politicized message from co-scripter Jonathan Demme, it's not quite as trashy as its campaign would lead you to believe, but it's still a fun timewaster for those with low demands.
Released to theaters by New World Pictures in May 1972, the film never quite reached the popularity of the outfit's similar offerings, especially the Pam Grier titles, but that's not really much of a surprise. (The MPAA lists RX: Revolution as an aka; has any paper surfaced under this title?) It hit VHS

in 1986 courtesy of Embassy Home Entertainment, but its digital editions since have left a lot to be desired; both the E.I. Women in Prison Triple Feature

utilize tape masters and are no real improvement on what came prior. Thankfully, the word on the streets is that Shout Factory will be doing the film up proper in 2012 as part of their Roger Corman's Cult Classics line; given their track record, this should prove to be the definitive release! 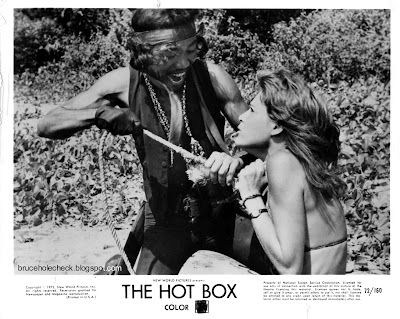 Newspaper ad courtesy of Fred Adelman's Critical Condition.
For a look at our last Challenge, click here.  While you're at it, Challenge #24 is still unsolved, so click here to try your luck! We also have quite a few unidentified Grab Bag photos, if you really want to show your stuff. And don't forget, our Upcoming Releases List (the best on the 'net) is constantly updated, so stop by and preorder some cool stuff!
© 2011 -- Bruce Holecheck. All Rights Reserved.
Posted by bruce holecheck at 10:44 PM