It's Name that Movie Monday! Challenge #18!


It's time for Challenge #18 here at the ol' Arcana! Can you identify this week's mystery photo, scanned direct from The Holecheck Archives? If you think you recognize it, post a comment below. As the week goes on, if no one guesses correctly I'll begin adding some pretty useless hints. Easy, right?
Here ya' go -- good luck! 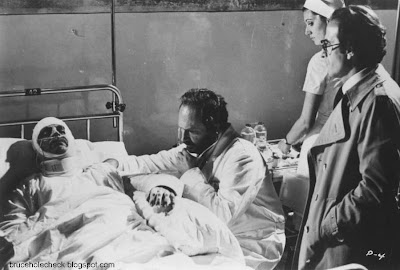 (1977), a supernatural-tinged giallo whose U.S. retitling and tagline kind of give away some of its worthy surprises.  After receiving visions of a vicious murder, a woman uncovers a skeleton at her husband's family estate.  Believing his cries of innocence, it's up to her to piece together the mystery of the images she saw, before it's too late...
Originally titled Seven Notes in Black, this transitional film for Fulci (smack dab in the middle of his earlier, more traditional thrillers like A Lizard in Woman's Skin

and Don't Torture a Duckling

and his later, legendary gore romps) is easily one of his best.  Its compelling script peels away its layers carefully, and the director is constantly aided by a wonderful score and nice photography by frequent collaborators Fabio Frizzi and Sergio Salvati, respectively.  While usually overlooked in favor of Lucio's more graphic endeavors, The Psychic has at least found itself memorable enough to be paid tribute in some unexpected places: there's an awesomely daft Bollywood remake named 100 Days, and a soundtrack cue popped up during an especially inspired sequence in Kill Bill, Vol. 1. 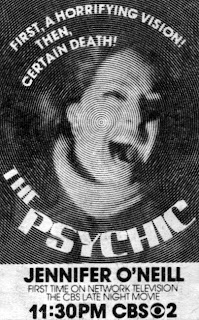 Group 1 released the film to domestic theaters in 1979, attempting to wring some name value out of former Cover Girl model and descending actress Jennifer O'Neill.  Like most of their holdings, it hit VHS care of Catalina Home Video, and was later reissued by Lightning Video.  (There's apparently a Video Treasures tape, too, but I never had it.)  DVD-era rumors circulated that the title was slated for re-release from Quentin Tarantino's Rolling Thunder Pictures--a clip was even included in one of his introductory wraparounds--but it was never to be.  Image Entertainment had their hands on it for a time, but that never materialized, either.
Finally, Severin Films gave The Psychic its English-friendly digital debut in 2007 (discounting the Alfa Digital bootleg that married the French DVD's video with an old VHS' audio track), containing a good-looking transfer of the full European version (the U.S. prints were all missing some credit footage and other minor bits), Group 1's preview and a half-hour featurette with writer Dardano Sacchetti and others.  (I contacted Jennifer O'Neill's reps requesting an interview for the disc; I never heard back...)  (And screw Fed Ex for losing my 35mm trailer on its way to Severin!)  A nice package for a highly recommended film.

Television ad swiped from Fred Adelman's magnificent Critical Condition, of course.
For a look at last week's entry, click here. And don't forget, our Upcoming Releases List (the best on the 'net) is constantly updated, so stop by and preorder some cool stuff!
© 2010 -- Bruce Holecheck. All Rights Reserved.
Posted by bruce holecheck at 6:47 PM