Welcome back to the ol' Arcana for another round of Grab Bag Goodies!
As outlined in previous installments, I purchased a few hundred promotional stills that have had their title captions trimmed off. Some I recognize, most I don't. It's up to my faithful readership to help me decipher what they're promoting. Hell, solve enough of 'em and maybe I'll send you some of the duplicates I received!
For those not familiar with promo stills, they occasionally carry a helpful hint or two. Some are branded with a cataloging code of letters and numbers which usually signify an abbreviation of the title (sometimes a retitling) and, if you're especially lucky, maybe the year of release (not to be confused with year of production). And that's pretty much all we have to go on...
The twelfth batch is below; let's see what you've got! 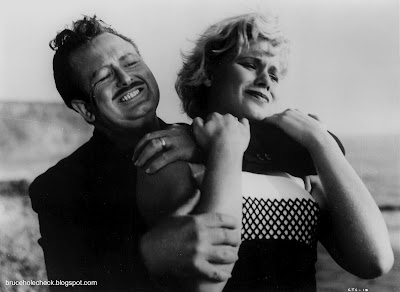 Thanks to Temple of Schlock's Chris Poggiali for identifying Will Zens' Capture that Capsule! (1961), a cheapo piece of crackpot Cold War propaganda detailing the efforts of the Russkies to retrieve a fallen satellite nose-cone that contains, um... important information. However, the whole thing's a sham, as our homeland Spy Squad (the flick's aka) have dropped a decoy in a ploy to flush the Commies out! Good thinkin', boys. As expected, Something Weird Video are the source for this one, as part of their Johnny Legend's Untamed Video series. (See also: #67.) 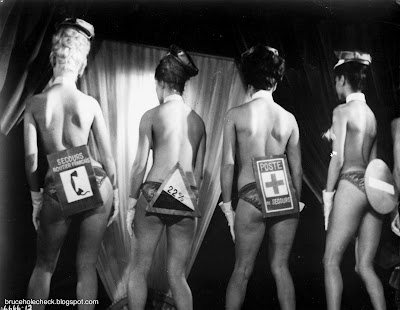 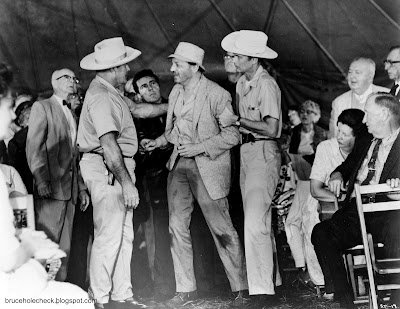 Another score by Chris Poggiali! It's tent revival time for Joseph P. Mawra's (Prieto's?) Shanty Tramp (1967), a sweaty and sleazy slice of '60s Florida sexploitation. Titular tramp Emily has no issues with rollin' around for a few bucks, be it with preacher, biker, or even her old man, but when Pops catches her having some private time with a black dude, good ol' fashioned American racism rears its head. Something Weird Video are probably the best source, though the cheapest and easiest way to check it out is Alpha's DVD double-bill with Larry Buchanan's Common Law Wife (1963). 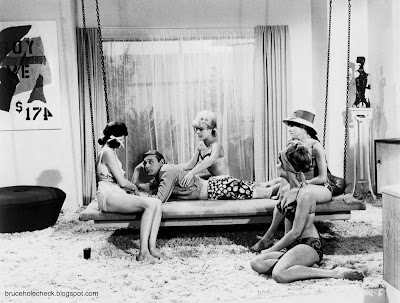 Hat trick! The Po-Man's on a roll! This photo belongs to Stephanie Rothman's feature-length debut, It's a Bikini World (1967). A late attempt to cash in on AIP's Beach Party series, this one focuses on self-centered womanizer Tommy Kirk whose determination to hook up with local feminist Deborah Walley compels a not-particularly-clever ruse: he pretends he's his own, imaginary nerdy brother. Of course, this can only last so long, and before you know it it's a full blown Battle of the Sexes. Particularly notable for its showcase of music acts like The Animals, The Toys, The Castaways, etc. along with its supporting cast like Bobby "Boris" Pickett and Sid Haig, Bikini has inexplicably remained MIA on home video, though a nice print has luckily turned up on cable and Netflix streaming. 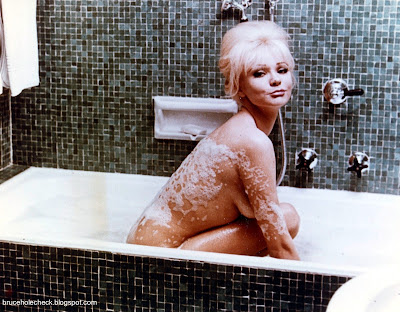 #60: No Markings!
Like what you see? Be sure and check out our previous Grab Bag Photos, some of which are still unidentified. Speaking of which, Name that Movie Monday Challenge #24 is still open; I've since added a few worthless hints for frustration's sake. (Challenges #27 & #28 have been solved, but real life keeps interfering with real blog updates! Damn the Man!)
And don't forget, our Upcoming Releases List (the best on the 'net) is constantly updated, so stop by and pre-order some cool stuff!
© 2012 -- Bruce Holecheck. All Rights Reserved.
Posted by bruce holecheck at 11:05 PM