Kickstart My Heart -- The Lost Films of H.G. Lewis! 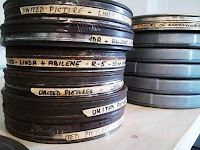 Process Blue is a Connecticut-based restoration house, probably most notable to Cinema Arcana readers for the work they've done cleaning up the Radley Metzger flicks for Distribpix. Sure, they look great, but what's that got to do with you, right? Well, it seems that in their sleuthing, they've managed to uncover negatives to three previously lost sexploitation films by Herschell Gordon Lewis! For better or worse, Linda & Abilene, The Ecstasies of Women and Black Love have all been located!

Rather than try to broker these out, Process Blue have embarked on a Side Project initiative, dedicated to preserving fringe titles and restoring their luster. Their plan is to master this trash trifecta for DVD and Blu-Ray sets. Again, what's that got to do with you, right? Well, for titles with such limited appeal, it's a tricky endeavor. That's why they're asking for help.

The outfit's started a Kickstarter campaign and been doing pretty well with it. They've set a $10,000 goal, and as of this posting raised 81% of it. But things have slowed. There's only ten days left, and still $2,000 to go. If the goal isn't met, these go back on the shelf -- along with some other titles, major titles, that I'd love to see get treated properly.

So scrounge up some change if you're able. The rewards program is pretty fair; I would recommend at least going the $50 route -- you get a button set, an exclusive shirt and a copy of the finished collection -- but every penny counts. And share the news on Facebook, on Twitter, on your newsgroups and messageboards, whatever.

Click here to donate at the official Process Blue: Side Projects Kickstarter Campaign. Check them out on Facebook, too!