The Return of Name that Movie Monday! Challenge #19!


It's time for Challenge #19 here at the ol' Arcana! Can you identify this week's mystery photo, scanned direct from The Holecheck Archives? If you think you recognize it, post a comment below. As the week goes on, if no one guesses correctly I'll begin adding some pretty useless hints. Easy, right?
Here ya' go -- good luck! 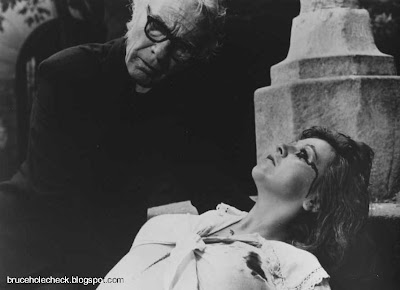 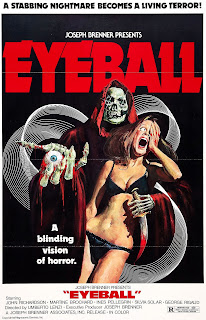 Eyeball received its belated Stateside release in 1978 courtesy of exploitation magnates Joseph Brenner Associates, Inc., who saw fit (as usual) to rework the title sequence and speed up the tempo by deleting some extraneous investigation footage.  It was a badly cropped version of this edit that hit the VHS scene in 1985, adorned with some of the most boring cover art you're likely to see, from JBA's usual standby, Prism Entertainment.  (My first knowledge of the film actually came from the cross-promo inclusion of its awesomely trashy trailer on the Prism tape of Pete Walker's Frightmare II.) 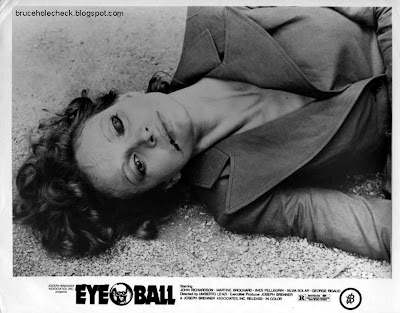 The earliest DVD on the scene was the 2002 Labyrinth des Schreckens (Labyrinth of Fright) disc from Germany's Marketing Film, which featured an anamorphic transfer of the original European version in its full 2.35:1 ratio, along with some stills and a trailer.  (Seeing the film properly presented definitely boosts one's opinion!)  This print was later recycled for the 2004 rerelease from X-Rated Kult Video.  There's also a 2007 Italian disc from Pulp Video, though I'm unsure if this offers an upgrade or not.  For some inexcusable reason, there hasn't been a domestic DVD release to date, a situation that desperately needs to be remedied. (Severin? Midnight Legacy? Synapse? Anybody?!  Somebody start a petition!)
As always, the poster image comes courtesy of Wrong Side of the Art.  The newspaper ad was swiped from Fred Adelman's highly recommended Critical Condition.
For a look at our last entry, click here. And don't forget, our Upcoming Releases List (the best on the 'net) is constantly updated, so stop by and preorder some cool stuff!
© 2010 -- Bruce Holecheck. All Rights Reserved.
Posted by bruce holecheck at 10:25 PM