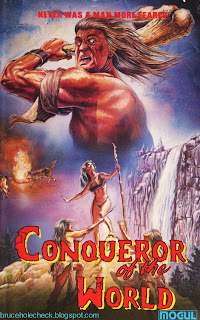 CONQUEROR OF THE WORLD
Alberto Cavallone's I padroni del mondo (1983)
The VHS Archives Factsheet
Label: Mogul Communications, Inc.
Catalog: MOG1010
Box Type: Clamshell
Year of Release: 1986
Runtime: 93:23
Print: 1.33:1 / English / No subs
Extras: None
About the Film
Director: Alberto Cavallone
Year of Release: 1983
Country of Origin: Italy
Stars: Sven Kruger, Viviana Maria Rispoli, Sasha D'Arc
AKAs: Master of the World
Verbatim Box Synopsis
Conqueror of the World, a thrilling and explosive story of violence... of human drama, of a rare man strong and primitive.  Set two hundred thousand years ago, when the human race had to adapt to their brutal savage environment or disappear into oblivion.
For Bog, the great warrior and leader this struggle signified conquering the Earth and gaining supremecy over his many rivals.  Nature at her most violent... Blood chilling tribal rites... Man at the mercy of his environment. 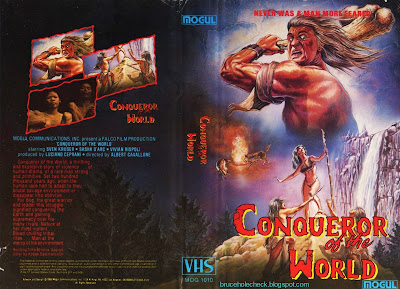 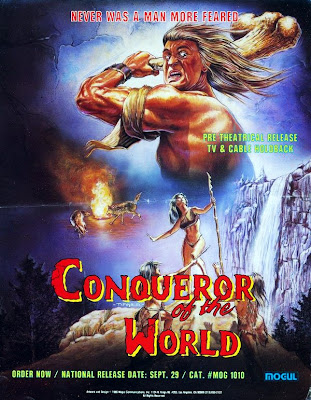 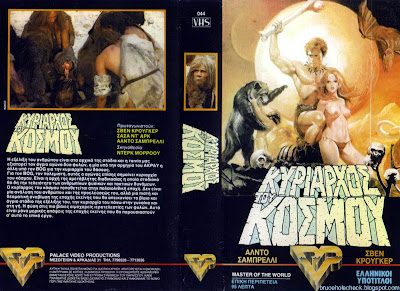 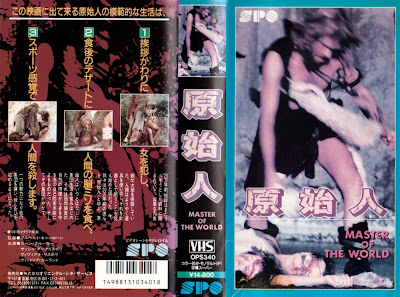 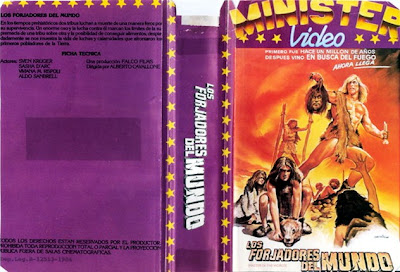 Totally whacked-out Italian caveman gore galore!  One of my favorite Mogul discoveries, I just about fell off of my couch years back when watching this for the first time.  Italian art / trash director Cavallone tries his hand in the Clan of the Cave Bear / Quest for Fire rip-off sweepstakes, and the world's a much better place for it.  The plot is standard bear-worshipping tribe vs. evil cannibals stuff, but Alberto, as usual, goes for excess, and the movie frequently derails into blood-soaked lunacy with hilariously-staged grizzly attacks, splashy spearings, extremely messy brain-eating, and an especially nasty slow decapitation by dull rock.  The gore chores were handled by the always able Rosario Prestopino, and I'm surprised this one isn't a little more well known in horror circles based on his contributions alone.

Looking for Conqueror of the World on VHS?  It's available on Amazon here.

Investigate more titles with Project: MOGUL!
For a look at other labels, check out The VHS Archives!
© 2011 -- Bruce Holecheck. All Rights Reserved.
Posted by bruce holecheck at 8:39 PM