Welcome back to the ol' Arcana for another round of Grab Bag Goodies!
As outlined in previous installments, I purchased a few hundred promotional stills that have had their title captions trimmed off. Some I recognize, most I don't. It's up to my faithful readership to help me decipher what they're promoting. Hell, solve enough of 'em and maybe I'll send you some of the duplicates I received!
For those not familiar with promo stills, they occasionally carry a helpful hint or two. Some are branded with a cataloging code of letters and numbers which usually signify an abbreviation of the title (sometimes a retitling) and, if you're especially lucky, maybe the year of release (not to be confused with year of production). And that's pretty much all we have to go on...
The seventh batch is below; let's see what you've got! 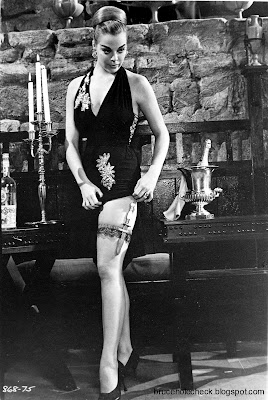 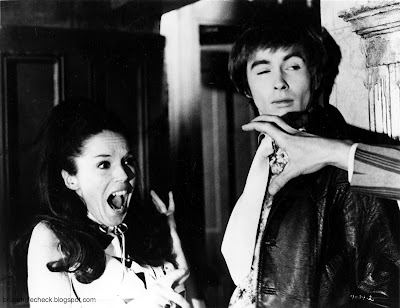 Turns out this shot is from Michael Armstrong's Horror House (1969), a Brit slasher precursor with a group of swingin' mods getting sliced up at an abandoned manor. Surprisingly violent for its day, with a cast including Jill Haworth and Frankie Avalon(!), it's somehow remained obscure on this side of the pond over the years.  Thankfully, there's a UK import DVD available for those able to play it, and I'd wager it's a probable future release for MGM's (aptly named, in this case) MOD program given its recent remastered cable airings.  Either way, it's certainly worth tracking down. 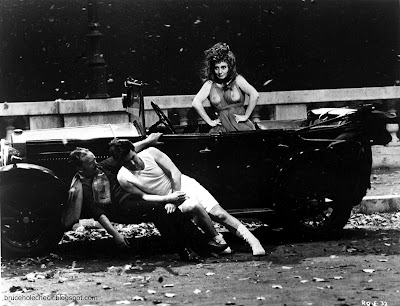 #33: RO-F-32 © 1972 United Artists Corporation
The Movie Geek speaks!  Thanks to Marc Edward Heuck for identifying Fellini's Roma (1972), the director's typically crazed, fluid, borderline-plotless look at his memories and fantasies surrounding Italy's capital city.  It's currently available on DVD from MGM, so give it a shot if you're feeling adventurous. And be sure to check out Marc's blog, The Projector Has Been Drinking. 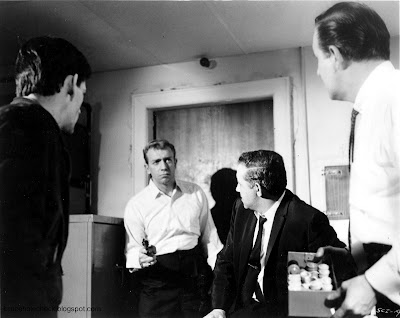 #35: LS-28
Like what you see? Be sure and check out our previous Grab Bag Photos, some of which are still unidentified. Speaking of which, Name that Movie Monday Challenge #24 is still open; I've since added a few worthless hints for frustration's sake.  (Challenges #27 & #28 have been solved, I've just been way behind on blog updates!)
And don't forget, our Upcoming Releases List (the best on the 'net) is constantly updated so stop by and pre-order some cool stuff!
© 2012 -- Bruce Holecheck. All Rights Reserved.
Posted by bruce holecheck at 11:47 AM