It's Name that Movie Monday! Challenge #17!


It's time for Challenge #17 here at the ol' Arcana! Can you identify this week's mystery photo, scanned direct from The Holecheck Archives? If you think you recognize it, post a comment below. As the week goes on, if no one guesses correctly I'll begin adding some pretty useless hints. Easy, right?
(Things have been a bit hectic lately, but I should get last week's Challenge updated shortly, along with posting a new interview and a look at some rare unused promo negatives.  Stay tuned to this channel!)
Anywho, here ya' go -- good luck! 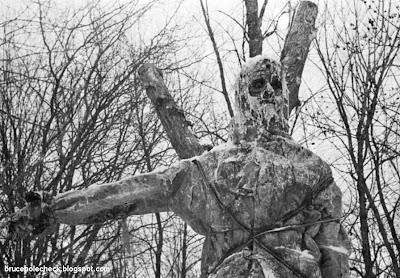 
Congrats to Todd Bridges, who makes it three by identifying Jean LaFleur's Ilsa, Tigress of Siberia

(1977) as this week's Challenge, scoring him dead even with current leaders William Wilson and Chris Poggiali.

The fourth and final entry of the gloriously sicko series finds our top-heavy heroine the commandant of a Russian "rehab" clinic, punishing her political prisoner population with forced ice baths, chainsaw arm-wrestling bouts and mind-altering electroshock treatments. If that doesn't work, they're simply fed to her pet tiger. When Stalin falls, our titular temptress makes her way to Canada(?), where she heads up a whorehouse and is more determined than ever to finish what she started... Less sadistic than its predecessors, this action-oriented Canuxploitation romp really should enjoy a greater reputation than it does. It's fast-paced, has plenty of explosions, inventive bloodshed, wholly gratuitous nudity -- plus, you get to hear stock music cues from Dawn of the Dead used in a shower sex scene!

Seeing release in its home country by production company Cinepix, New World Pictures grabbed it for U.S. release and issued a cut, R-rated version to a few screens in 1978 under the title The Tigress. (Cinepix also used this moniker; the character is never actually addressed as Ilsa in the film. Copyright reasons? Or perhaps fear of a backlash?) Their hilariously-misleading poster featured a generic model on a tiger-skin rug; one can only imagine how thrilled audience members were to find a film rife with impalements, shootings and the occasional snowplow dismemberment. According to Christopher T. Koetting's book, Mind Warp!, the film then went on to "a four-year engagement at US military bases overseas, at which it premiered in May 1980." That's one way to keep morale high!

This censored edit found its way to VHS from Charter Entertainment, again titled The Tigress, while American Video issued it intact under the more exploitable Ilsa, the Tigress of Siberia. Amazingly, there's currently no domestic DVD; however, those with PAL capabilities can grab the 2004 release from Shock Distribution. It's an okay anamorphic print -- not up to today's transfer standards but it's uncut and remains the best current option (other import discs are flawed with forced subtitles, optical censoring, etc.). Supplements include the ironically-narrated trailer (embedded below) and a stills collection that consists of a lot of screen captures, followed by some genuine advertising materials. It'd be great to get a new hi-def transfer of this sucker, with Dyanne Thorne commentary and some other extras; hopefully someone out there reading this can make it happen!

For a look at last week's entry, click here. And don't forget, our Upcoming Releases List (the best on the 'net) is constantly updated, so stop by and preorder some cool stuff!
© 2010 -- Bruce Holecheck. All Rights Reserved.
Posted by bruce holecheck at 10:42 PM