Back in 2004, I met up with Mondo Macabro's Pete Tombs and Andy Starke, who were in town working on the supplements to their then-upcoming DVD of Parts: The Clonus Horror

. Over the course of the night, as we guzzled beer and chowed down Ethiopian food, conversation inevitably turned to film and my personal Mondo Macabro wishlist.  Pining for the likes of Robert de Nesle-produced Franco fare, especially Lorna the Exorcist

and The Perverse Countess, Pete chimed in, "Oh, we know where the rights are..."

Six years later, my favorite label has just issued a superlative edition of Jess Franco's classic, Sinner: The Secret Diary of a Nymphomaniac

-- an easy inclusion for my upcoming Top Ten DVDs of 2010 list -- finally wrestled free of its tangled rights nightmare.  In celebration, here's a little chat with Pete about the obscenely prolific director and the effort put forth to do his films up right.
Cinema Arcana:  What is it about the films of Jess Franco that, for all his faults, makes his output so alluring? 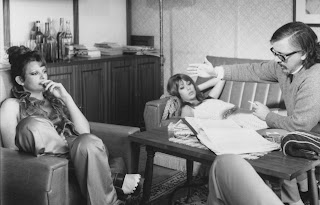 Pete Tombs:  I guess Franco is someone who always went his own way.  Sometimes it works, sometimes it doesn't, but there's usually something memorable, in even the smallest of his films. Sometimes just a scene, sometimes just the mood or atmosphere.  It has to be said that there are many who don't like what he does and to try to defend him from the critical brickbats of his detractors is not a task I would wish to take on.  (Not that he needs me to do it!)  What was it Donovan sang?  "Someone's opinion of moonlight..."
CA:  What are your personal favorites?
PT:  The Francos that I find most memorable are Lorna the Exorcist, Sinner, Eugenie, Diabolical Dr. Z, Shining Sex...
CA:  The Robert de Nesle-produced films have had a notoriously rocky road to their DVD debuts.  What exactly did you have to go through to get this deal made?
PT:  I could write a book about the travails we went through to get the de Nesle films licensed.  But I won't.  I'm happy to let the bad memories fade.  Let's just say that there were numerous personal, legal and financial hurdles to jump and at one point it seemed like new hurdles were being added every week.  Anyway, who cares at the end of the day?  We got a couple of them out there and they're good ones.

There are some interesting extras on both.  We get Stephen Thrower's thoughts on the films and on Franco - ahead of the mammoth and essential book-length study he's currently working on.
We also get, for the first time as far as I'm aware, an interview with Gerard Kikoine giving us his memories of Robert de Nesle and working on the Franco films.  Lots of interesting stuff there, much of it new to me. 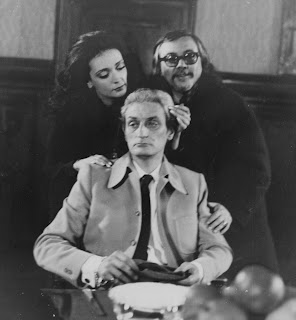 CA:  You've talked a bit on blogs and messageboards about the problems with the original elements to Lorna the Exorcist.  What sort of shape were they in?  How did you manage to piece together your final transfer?  Is there any more unseen footage besides the legendary dildo bit?
PT:  The Lorna negative supplied to us (and so far as we can see, the only materials available) had been edited by de Nesle and turned into a porno movie.  And it looks like whoever did it threw away or misplaced the footage they cut out.  Certainly we couldn't find it.  However, thanks to the indefatigable Lucas Balbo we were able to locate some rare 35mm prints of the film.  To our great delight, both contained scenes that had not been in any of the video versions of the film we had seen, which meant that we were able to reconstruct what we believe to be the original near 100-minute cut of the film that was widely thought lost forever.  Some of the material is in pretty poor condition, but we spent a small fortune doing as much as we could to make it watchable - and I think it looks very good now.  Some of it looks spectacular.  There are a number of extra scenes and lots of extended bits that will be new to viewers in this version. 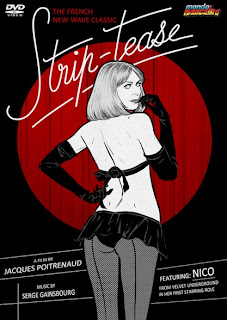 CA:  With Sinner now available and Lorna on the slate for January, what else can we look forward to from Mondo Macabro in 2011?
PT:  Our next release is a complete contrast to the Franco films.  It's Strip-Tease - the 1962 French film starring Nico, of Velvet Underground fame.  This has never been issued on any form of home video before and has only been rarely seen since its initial release.  For Nico fans (and I hope there's a lot of them out there!) this will be a must buy.
Thanks, Pete!  The photos of Jess on set come courtesy of Mondo Macabro.  For more Mondo Macabro news, check out their website and blog.