Welcome to Five Films, a self-descriptive feature here at Cinema Arcana where I invite guests to contribute lists of movies they feel are underrated. No rules, no limits -- just a quintet of motion pictures they'd love more people to know about. Hopefully in doing so we can turn you, the fearless reader, onto a gem you've previously skipped or remind you to rewatch a past favorite you've forgotten about.

Tonight's '70s-centric line-up comes from Jim VanBebber, the charismatic and controversial director of the gritty gang warfare revenge piece Deadbeat at Dawn (1988) and the haunting, harrowing docudrama The Manson Family (2003), along with a slew of acclaimed shorts including the rural cannibal nasty Roadkill: The Last Days of John Martin (1988), the Chas. Balun-scripted salvage yard slaughterthon Chunkblower: The Movie (1990) and the Ricky Kasso cult killing-inspired My Sweet Satan (1993). His latest effort, the 'Nam-vets-go-berserk-on-the-Bayou promo reel Gator Green (2013), recently supported The Manson Family on its Tenth Anniversary theatrical tour and can be found on the new Severin Films Blu Ray release. So, without further ado...
End of the Road (Aram Avakian, 1970) 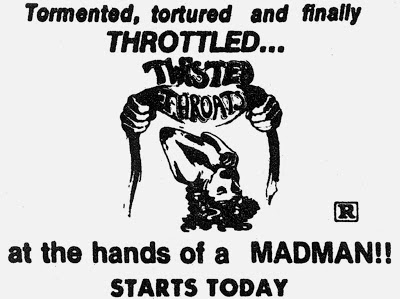 
(End of the Road trailer uploaded by "Our Man in Havana." The Photographer and Death Game trailers courtesy of Grindhouse Releasing. Challenge to Be Free clip courtesy of Lionsgate. Twisted Throats ad courtesy of Temple of Schlock.) 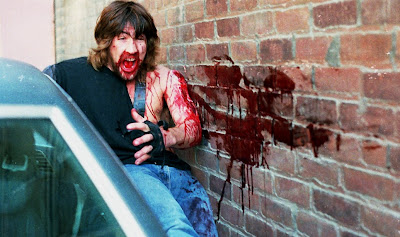