It's Name that Movie Monday! Challenge #6!


It's time for Challenge #6 here at the ol' Arcana.  Can you identify this week's mystery photo, scanned direct from The Holecheck Archives?  If you think you recognize it, post a comment below.  As the week goes on, if no one guesses correctly I'll begin adding some pretty useless hints.  Easy, right?
Here ya' go -- good luck! 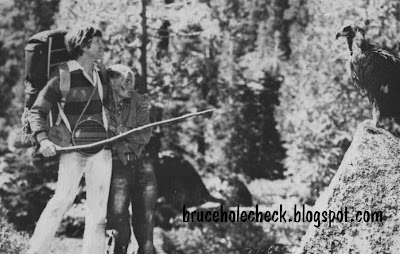 (1977).  After having a surprise hit with the prior year's awesome Grizzly

Theatrical duties went out to producer Edward Montoro's Film Ventures International, who proceeded to advertise it with several different campaigns, including a 1978 reissue as Something is Out There.  There was even a tie-in novel!  Shortly thereafter, Girdler and Montoro would find themselves in a legal dispute over the ever-growing Grizzly profits, leading to the end of their collaborations.
On home video, Day of the Animals saw VHS release in 1982 from Media Home Entertainment.  The tape was intact, but cropped from its original scope framing, eliminating a lot of the gorgeous location shooting the film benefits from.  Fans hoped for a correctly formatted release when it was announced for DVD in the infancy of the format (by an outfit known as DVD, Ltd.; how's that for imagination?), but it unfortunately remained an aged, cropped transfer.  In 2006, Media Blasters thankfully did the title right, striking a new master from one of the few 35mm prints known left to exist, finally restoring its full picture and supplementing it with interviews, trailers, commentary and more.  (They even issued it in a triple-pack

including Grizzly and Curtis Harrington's Devil Dog, Hound of Hell!)

For a look at last week's entry, click here.  And don't forget, our Upcoming Releases List (the best on the 'net) is constantly updated, so stop by and preorder some cool stuff!
© 2010 -- Bruce Holecheck. All Rights Reserved.
Posted by bruce holecheck at 8:28 PM