My First Award! (aka Ten Things I Like that You Probably Don't Care About.) 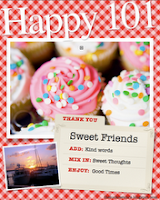 It seems I've been tagged with some sort of random award, the "Happy 101," by Alex B. of Trash Film Addict. He had this to say in his write-up:
"Bruce Holecheck of CINEMA ARCANA.
You need to check that blog out. Even just to see the fab banner. And they have cool movie quizzes and other stuff. Recommended."
Not bad for a blog I basically started with the singular purpose of housing the Mondo Digital Upcoming Releases List. So thanks, Alex; I really appreciate it.  I'm just happy at least a couple of people are reading this thing!
Now, Alex didn't leave me with any details about what this award actually was, so I had to do a little digging on my own.  Apparently I'm supposed to list ten things that make me happy, and then name ten other blogs that make me happy.  Like some sort of nerd-ass new millennium chain letter. Normally I'd ignore this portion quicker than a Carl Lewis morning jog, but it's my first award and I don't want to look ungrateful, so...
Ten Things that Rock Out Loud:

1)  Dan Taylor's Pulled Pork.  Probably at the top of my mind, since in a few hours I'll be heading over to good pal Dan Taylor's place for his yearly ETPBBQ, joining old friends that I don't get to see nearly enough, like Tomb it may Concern's David Zuzelo and ex-Videooze editor Bob Sargent.  It's my favorite cookout of the Summer, as we drink and eat ourselves silly all day long, then eventually make our way inside for a triple-threat trash treat.  This year I programmed a Redneck Rampage bill with God's Bloody Acre

and Hunter's Blood.  Can.  Not.  Wait.
2)  Exhumed Films' Annual 24-Hour Horrorthon.  Going on its fourth year this October.  24 nonstop hours of 35mm weirdness, courtesy of Exhumed Films.  Words can't adequately describe the feeling of communal frenzy that occurs at 4 o'clock in the morning, when hundreds of people, unstable and delirious from already sitting through 16 straight hours of cinematic insanity, have Teenage Mother

, Don't Be Afraid of the Dark

, or anything else you can't believe you're seeing on the big screen.  I wouldn't miss it for the world.
3)  Demolition Derbies.  I mean, seriously, it's three hours of cars crashing into each other.  I'll see you at The Buck!

4)  Special FX Make-Up. I always wanted to be a make-up artist when I grew up. Didn't quite get around to it. Today's CGI beasties sicken my stomach. I love the imagination, the invention, the creativity of practical fx work. The physicality of it, the act of creating that illusion with real world means. Anything else is bullshit.
5)  Traveling Variety Shows.  I'm way too young for the real heyday of freakshows, spiritualists, carnies and the like.  But that doesn't mean I won't go out of my way for any and all sword swallowers, burly q dancers, daredevils or contortionists that happen to be passing through.  If you're barking a bit of showmanship, I'll be there.  Promise me a two-headed kid, and you've got my $2.

6)  Off-Kilter Tourist Traps.  There's a place in Natural Bridge, Virginia named Dinosaur Kingdom that wonders what it would be like if there were dinosaurs around during the Civil War.  And it recreates this wonder with lifesize fiberglass models, some of which are animated.  And since this is Virginia, the dinosaurs are only eating Northern soldiers.  Right here in Baltimore we have the National Great Blacks in Wax Museum.  One of the exhibits is The Middle Passage, detailing the history of the slave trade in graphic detail, including corkings, brandings, decapitations, castrations, lynchings and more.  It's your own personal Farewell, Uncle Tom

, but in wax. These places were someone's "good" idea, and I love them for it.
7)  Reverse Cowgirl. Just because. 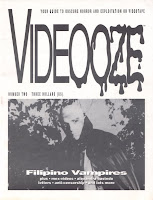 8)  Old-School 'Zines. In an era where anyone and everyone can spit out whatever slop they want all over the internet, it's almost alien to think that there used to be people with such unbridled enthusiasm, dedication and desire to share that they slaved away, for no profit, on their own homemade publications. John Szpunar and I were once working on a book documenting this practically now-dead phenomena, and while it's currently stalled (at least on my end; I've hardly talked with John since the Barrel days) I hope we someday finish celebrating this little slice of history.
9)  YouTube Videos of People Getting Hurt.  I've seriously spent inordinate amounts of time on the site searching terms like "falling off of ladder," "shark attack," "snowmobile wreck," "trampoline accident" and more.  I can't stop.  It's a sickness.  I've joked about unrolling a new endeavor titled Ouch! The Blog! to chronicle the pain.  Why do I have a feeling it would eclipse this page's views in about 45 minutes?
10)  Being Recognized for this Award.  Who doesn't want to hear that someone likes what they're doing?
As for other blogs, pretty much anything on my sidebar is worth checking out.  Davey Z's Tomb it may Concern is constantly updated with enthusiastic reviews and rambles, not to mention pictures of naked Eurotrash actresses.  Chris Poggiali is an exploitation encyclopedia, and his Temple of Schlock is not to be missed.  Jared Auner's Worldweird Cinema covers titles you're not going to read about elsewhere.

My new favorite blog find is actually Quasi-Interesting Paraphernalia, Inc., which I stumbled upon while looking for an image of the Slithis Survival Kit.  The page finds itself home to scans of vintage travel brochures for oddities long gone, in addition to occasional catalog pages, commercials and newspaper advertisements.  If you're a sucker for this stuff like I am, you'll spend more time than you want perusing their past posts.  So that's who I'll nominate for this award; instead of ten blogs, I nominate one!
And with that, I'm done writing for today.  It's time to clean myself up and travel across town for a day filled with good food, good beer, good company and good times.  Hopefully everyone reading this can do the same!
© 2010 -- Bruce Holecheck. All Rights Reserved.
Posted by bruce holecheck at 2:35 PM