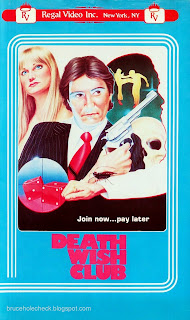 Verbatim Box Synopsis
A handsome young gigolo offers a pretty young girl huge amounts of money to live with him. Soon they become members of an eerie club where the only common bonds are exciting ways of committing suicide. 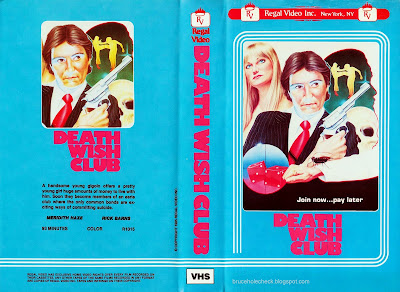 In 1985 Death Wish Club was condensed, augmented and generally reworked to be included as a segment in the awesome anthology, Night Train to Terror. Above is a compilation of its best moments, put together and uploaded by "NightmareSeasons".

Looking for Death Wish Club on VHS? It's available on Amazon here, but be careful: some sellers have the 21st Genesis release or the AIR tape instead of the Regal. If you want the best current release, Vinegar Syndrome have included the entire film as a supplement on their essential Blu-Ray/DVD release of Night Train to Terror!