It's Name that Movie Monday! Challenge #11!


It's time for Challenge #11 here at the ol' Arcana! Can you identify this week's mystery photo, scanned direct from The Holecheck Archives? If you think you recognize it, post a comment below. As the week goes on, if no one guesses correctly I'll begin adding some pretty useless hints. Easy, right? (Or not so much?  For two weeks and running Challenge #9 is still up for grabs!  I've already added a few hints; maybe another picture is in order?)
Anyway, here ya' go -- good luck! 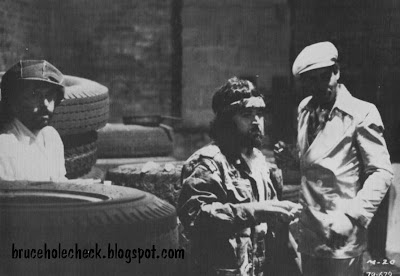 Congrats go out to Todd Bridges for scoring his second win (in a single day!) by identifying George A. Romero's Martin

(1977) as this week's challenge.  A melancholic tale of a maladjusted teen who may or may not be a vampire, Romero claims the film as his favorite, and it's hard to argue.  (Ask me next week, and I might name Knightriders

as his true masterpiece, but for now, it's Martin!)

Released to theater screens in 1978 by Ben Barenholtz's Libra Films, it eventually made its way to home video from Thorn/EMI (with various reissues from its parents/subsidiaries) in the '80s.  There was even a laserdisc, for those lucky enough to get one.  In 2000, Anchor Bay Entertainment gave Martin its DVD debut (and again issued a VHS) in the director's preferred 1.33:1 ratio; the subsequent 2004 producer-approved disc from Lionsgate mattes things to a tight 1.85:1.  Both are worth getting, just for the different perspectives presented in their commentary tracks.  One can hope someday we'll see a definitive edition on Blu Ray, including the Italian variant (which was restructured and scored with Goblin tracks!) and the long-lost 165-minute original cut! (A pipe dream, I know...)

Poster scan courtesy of Wrong Side of the Art.


For a look at last week's entry, click here. And don't forget, our Upcoming Releases List (the best on the 'net) is constantly updated, so stop by and preorder some cool stuff!
© 2010 -- Bruce Holecheck. All Rights Reserved.
Posted by bruce holecheck at 8:01 PM