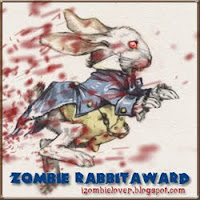 It appears I've been infected, not once, but twice, by the "Zombie Rabbit Award."  The first bite was from Chris Poggiali at Temple of Schlock; the second, by Marty McKee at Johnny LaRue's Crane Shot.  Both blogs are excellent reads and have been part of my sidebar since pretty much Day One.  I highly recommened swinging by and adding them to your favorites, or subscribing, or doing whatever it is that you kids do nowadays.  You won't regret it.
Now, I do have to say I was a little sad there doesn't appear to be any qualifiers for this award; I'm always itching for an excuse to make a new Top Ten list or to explain why I think Return of the Living Dead: Necropolis

is completely awesome.  Perhaps I'll get around to it another day...

What I am supposed to do is list ten other spots worthy of spreading this contagion to, which is something I'm terrible at.  All of the sites listed to the left are well worth checking out; you can't go wrong with any of 'em.
However, in the spirit of this award, I'll talk a little about two new additions.  Jack Jenson recently started Backyard Asia to examine the odder side of world cinema; I'll be curious to see what he digs up as time progresses.  But my new favorite blog (and the one I'll nominate for this award) is The Original Video Junkie (or whatever they're calling it this week).  The short-lived print 'zine makes its web appearance with a bang, as the ridiculously prolific pair of William Wilson and original editor Thomas Simmons crank out reviews, comparisons, rants and more.  Currently they're examing all the Raiders of the Lost Ark rip-offs to pop up around the globe, and earlier topics include the later work of Tobe Hooper and a comparison of Fangoria Films' Mindwarp with its uncut Brainslasher incarnation (something I've been meaning to do for years).
So there ya' have it!  Until next time...
© 2010 -- Bruce Holecheck. All Rights Reserved.
Posted by bruce holecheck at 12:05 PM