It's Name that Movie Monday! Challenge #13!


It's time for Challenge #13 here at the ol' Arcana! Can you identify this week's mystery photo, scanned direct from The Holecheck Archives? If you think you recognize it, post a comment below. As the week goes on, if no one guesses correctly I'll begin adding some pretty useless hints. Easy, right?
(It must be, as all past challenges have now been beaten, including #11 and The Champ, #9, which remained undefeated for a record 26 days!)
Anyway, here ya' go -- good luck! 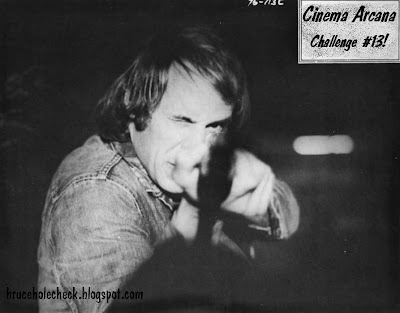 (1976). This way-above-average Canadian rapesploiter showcases a battle of the sexes when fashion model Brenda Vaccaro (on a getaway with her swinger dentist!) outraces local rough Don Stroud and his gang of creeps. Not thrilled with getting showed up by a chick, a Straw Dogs-esque home invasion scenario ensues and the not-so-happy couple is forced to fight for their survival.
Gaining a Stateside release in 1977 by American International Pictures, they retitled the film The House by the Lake to capitalize on its Last House on the Left similarities, while North of the Border (and pretty much everywhere else) it remained Death Weekend. In 1985 Vestron Video released it under this title, and that's unfortunately been the last word so far. (At least it's a decent, open-matte print!) A frequent staple of "Why Isn't This on DVD" lists, one can only hope the future will bring us a nice, new remaster. I would think MGM still control the rights; at the very least let's get an HD cable screening! 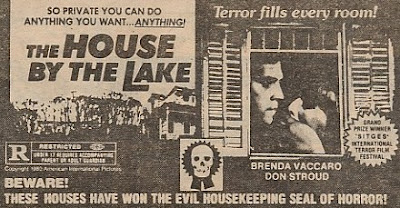 
For a look at last week's entry, click here. And don't forget, our Upcoming Releases List (the best on the 'net) is constantly updated, so stop by and preorder some cool stuff!
© 2010 -- Bruce Holecheck. All Rights Reserved.
Posted by bruce holecheck at 7:58 PM