It's Name that Movie Monday! Challenge #16!


It's time for Challenge #16 here at the ol' Arcana! Can you identify this week's mystery photo, scanned direct from The Holecheck Archives? If you think you recognize it, post a comment below. As the week goes on, if no one guesses correctly I'll begin adding some pretty useless hints. Easy, right?
Here ya' go -- good luck! 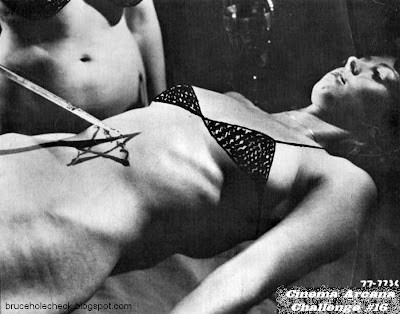 (1976) through the satin scribblings of the censor's Sharpie.  Apparently filmed as Evil Heritage, the story follows young Catherine, who, after watching her parents inexplicably blow up in a car crash, moves in with her uncle Alex (a ridiculously-mustached Michael Gough). Unfortunately for her, it seems ol' unc' is a closet cult leader and has one hell of a birthday party planned for his new tenant. 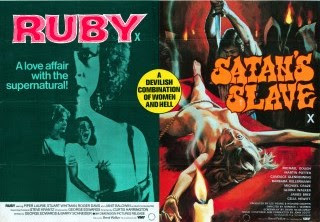 Receiving its belated Stateside release in 1979 courtesy of Crown International Pictures (who also issued Warren's later supernatural slashfest Terror the same year), the film surprisingly never garnered a domestic VHS issue (unless there's something I'm forgetting) and the curious were forced to seek out the Canadian tape (sometimes popping up in more well-stocked rental outlets) or one of the European imports. 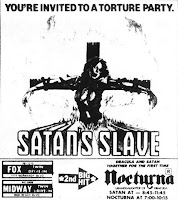 Things became even more problematic in the digital age.  Satan's Slave didn't get a U.S. home video release proper until 2004 when Rhino included it as part of their Horrible Horrors Collection, Vol. 1

.  While the disc was completely uncut, notably showing a harder psychosexual scissor-assault than found in some foreign versions, it was also badly cropped to fullframe from the original 2.35:1 framing. Shortly thereafter, Britain's Anchor Bay UK issued a nice, correctly-framed special edition as part of their Norman J. Warren Collection, and it was almost perfect; as expected, the aforementioned scissor bit wound up being replaced by a less explicit alternate version.  (The BBFC wouldn't even pass the complete sequence for inclusion as an extra.)  Hopes were briefly buoyed when BCI Eclipse announced their acquisition of the Crown catalog, and their 2008 disc

(paired with Terror) sported a new transfer in the correct ratio, but was cut of multiple sex & violence highlights.  It was this censored edit that eventually made its way to Mill Creek's 2009 Gorehouse Greats

set.
So what's a fan to do?  Buy the Anchor Bay UK DVD for the print and supplements, and grab the old Rhino disc for the complete harder cut?  One can only hope eventually someone will come along and finally present the hard export version in its intended scope.

(Since this writing, Scorpion Releasing have announced they'll be issuing the full uncut version in its correct scope ratio.  You can find it on Amazon here.)

Poster courtesy of Wrong Side of the Art.  Newspaper ad taken from Serious Exploitation.
For a look at last week's entry, click here. And don't forget, our Upcoming Releases List (the best on the 'net) is constantly updated, so stop by and preorder some cool stuff!
© 2010 -- Bruce Holecheck. All Rights Reserved.
Posted by bruce holecheck at 6:49 PM