It's Name that Movie Monday! Challenge #22!


It's time for Challenge #22 here at the ol' Arcana! Can you identify this week's mystery photo, scanned direct from The Holecheck Archives? If you think you recognize it, post a comment below. As the week goes on, if no one guesses correctly I'll begin adding some pretty useless hints. Easy, right?
Here ya' go -- good luck! 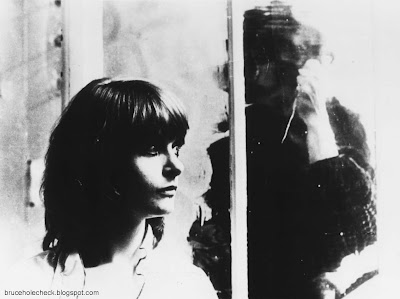 (1978) as the mystery film of this week's challenge. Admittedly influenced by Argento's Suspiria, this supernatural-tinged slasher / giallo is one of the director's most enjoyable efforts, albeit a bit nonsensical. A confused tale of a film crew whose talent is getting ruthlessly slaughtered by an unseen assailant who may or may not have something to do with a longstanding family curse, it's basically nothing more than a set up for multiple gory setpieces, all stylishly lit and shot like all your favorite Italian horrors. And really, what the hell more do you want? Oh yeah, it's got nudity, too. 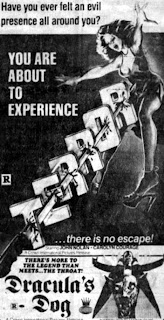 Released to U.S. theaters in 1979 by Crown International Pictures, the film made its way to home video in the '80s courtesy of VCI Entertainment and was later reissued by their United

arm, both of which served the film pretty well. Crown's tape master was reused in 2004 for the film's digital debut from Rhino as part of their Horrible Horrors

set, but shortly thereafter Terror hit U.K. DVD as part of Anchor Bay's recommended Norman Warren Collection. This version featured a new anamorphic transfer and a slew of supplements; the whole set is well worth seeking out if you're a fan of the director. In the U.S., the film was acquired by BCI Eclipse as part of their deal with Crown, who proceeded to release a nice print of it twice: once in 2006 paired with the shortened domestic print of Land of the Minotaur, and again in 2008 sharing space with a cut edit of Warren's Satan's Slave! Once the label folded, their catalog seeped over to Mill Creek, who stuffed the film into their Gorehouse Greats

compendium in 2009. If all you're looking for is the film, this is a good and cheap alternative to the import set; copies can be picked up for peanuts nowadays! Though it's not a likely candidate, I'd love to see the film get upgraded to Blu Ray; its colorful palette would really be a pleasure to see in hi-def! 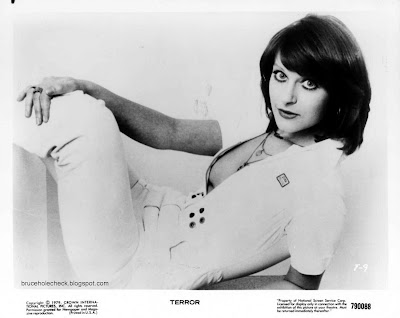 (Since this post was originally written, Scorpion Releasing have reissued Terror on DVD with some of the UK release's supplements, paired with an uncut version of The Devil's Men / Land of the Minotaur.  It can be purchased from Amazon here.)

Newspaper ad courtesy of Fred Adelman's essential Critical Condition.
For a look at our last entry, click here.  For the unbeatable Challenge #20, unsolved since December(!), click here.  We also have quite a few unidentified Grab Bag photos, if you really want to show your stuff. And don't forget, our Upcoming Releases List (the best on the 'net) is constantly updated, so stop by and preorder some cool stuff!
© 2011 -- Bruce Holecheck. All Rights Reserved.
Posted by bruce holecheck at 5:51 PM