It Won't Stay Dead -- Screenwriter Lon Huber on THE CURSE OF THE SCREAMING DEAD (1982)!

The internet's a funny thing. For years I've been a casual acquaintance of a fellow named Lon Huber, mostly on movie-themed messageboards like the Mobius Home Video Forum and The Eurotrash Paradise Yahoo group. A nice enough guy, he runs the UHF Nocturne website and his contributions to a discussion are always worthwhile reading. However, it wasn't until plowing through some old tapes for my ongoing VHS Archives series that I found my history with Lon goes back even further...

"Ah, Bruce, Bruce, Bruce...
I knew it would come to this, sooner or later.
I confess. I wrote Curse of the Screaming Dead.
Tony "Skip" Malanowski's accounts of it [as remembered in Stephen Thrower's Nightmare USA] pretty much tell the tale, but here are a few details from my perspective.

I grew up in Marin County, California, and Skip was part of the Baltimore horror community. We met in 1974 when I went East for the Famous Monsters Convention, and we stayed in touch through letters, fanzines, and drunk/stoned cassette recordings.
In 1977 I got the urge to travel. Skip flew out to California and we drove cross country to Baltimore together in a Ford Galaxy 500 I'd bought for $600, which lost its transmission just as we were parking it in his parents' yard. I spent '77 - '78 in Baltimore, but had been back in Marin County a couple of years when Skip decided to make a movie.

Skip had just cut his regional indie teeth crewing on Don Dohler's The Alien Factor and Fiend, after which he wanted to have the full auteur experience for himself. Being a jump-in-with-both-feet kinda guy, he decided to learn how to make a feature film by just making a feature film.
That was the whole point for everyone concerned: make a feature film with whatever resources we had. Good or bad, no matter what, it would be a feature film! 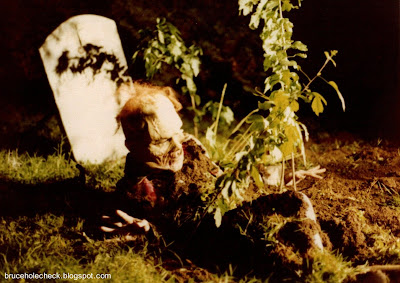 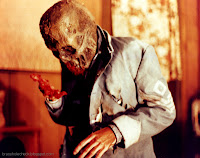 Skip told me what settings he could probably get, what kinds of effects he thought he might be able to do, and the number and genders of the performers he'd rounded up. I thought up characters to fit the cast, and situations to fit the locations and available effects. I knocked it out eight or ten pages at a time, mailing xeroxes to Skip as I went. It was all first draft. No revisions, aside from cuts when my imagination exceeded the effects budget.
At one point Skip thought he'd figured out a way to blow up a car without a permit. That plan was abandoned, but the scene was left in... hence the burning plastic Revell (or Aurora or AMC) model car! That is my favorite scene in the film!
My extended lesbian sex scene was never shot.

I was not present for any of the shooting. I had no sense of how to write for actors, and never heard my dialogue read until I saw the movie on VHS several years later. Also, I had no idea at all how to time or pace a story for narrative film. Which was terrific, because Skip had no idea how to block a shot or shoot for continuity! Also, he was shooting on stray weekends over MONTHS, one or two days at a time, sometimes shooting one actor's dialogue and another actor's response weeks or months apart, sometimes on different film stocks, with different lighting, in a different location, and then hoping he could cut it all together months later into one seamless scene! Ah, the enthusiasm of youth! 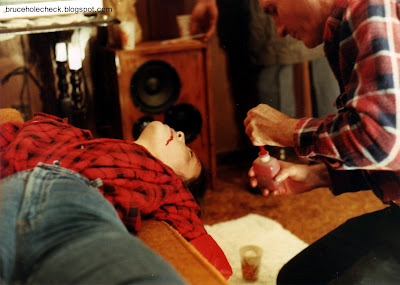 Curse of the Screaming Dead was like the films most kids made in their backyards on two rolls of Super 8 when they were 13, but we were absent from self-taught film class that decade, and so made ours when we were 25 on feature length amounts of scrounged 16mm film.
Curse of the Screaming Dead would never have been seen by anyone but we makers and our friends, but for the fact that little home video companies were springing up all over who would buy anything with a marketable title that could be transferred to VHS. The Alien Factor had actually turned a tidy if not monumental profit with video, TV, and foreign rights sales. I'm pretty sure Skip used the Dohler example when he pitched Screaming Dead to various startup VHS outfits.

Skip and the rest of the crew had been burned by Don Dohler on points for The Alien Factor - it actually went to court. Skip was therefore incredibly meticulous about the budget. Honestly, whatever else can be said about Curse of the Screaming Dead, every last nickel was accounted for. It may have been the most honest and above-board feature film accounting in film history. There was simply no creative accounting. The end result was that when Mogul bought Screaming Dead, not only was the entire $7000 returned to the friends-and-family investors, but there was a miniscule but real profit for everyone. I got $400 out of the deal, which is exactly what Greenleaf Classics was paying at the time for a 30,000 word strokebook. 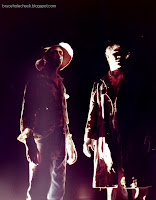 I have a Mogul VHS of the film, and a color tear sheet which was probably a handout at whatever film market event Mogul hawked it at. (A cat I used to have chewed on the tear sheet, so it's somewhat mangled.) I also have a binder somewhere with my original manuscript of the screenplay, pounded out on a manual typewriter which has long since become landfill.
Now, something I've never seen Skip mention online is that we planned a followup. In a cardboard box in my hall closet resides a finished screenplay entitled Zombies for Dollars which I wrote in 1981 while Skip was editing Curse of the Screaming Dead and shopping it around to video companies.  Zombies for Dollars was a comedy in which a post-Dawn of the Dead America addresses its zombie problem with a Death Race 2000-style zombie hunting game show in which the entire city of Baltimore is the playing field. In my mind it was SCTV's production of Last Man on Earth. We had visions of shooting guerilla-style in downtown Baltimore on Sunday afternoons. 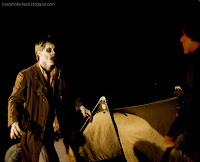 The screenplay to Zombies for Dollars is a full 5% better than Curse of the Screaming Dead. If we had made it, it almost certainly would have ended up on video, and we would almost certainly have made another, and my writing and Skip's directing may have improved bit by bit and who knows...?
Zombies for Dollars never happened. Skip moved to L.A. to work for Dave DeCoteau and Fred Olen Ray. He's still an editor and producing value added content for DVDs, and doing really well last time we spoke. I freelance doing IT for small businesses who use Macintosh computers. Neither of us expected Curse of the Screaming Dead to do anything more than rot on video store shelves, but it won't stay dead!"
****************
Thanks a million, Lon!  For more on Curse of the Screaming Dead, be sure to check out our VHS Archives entry, complete with memories from actor / make-up artist / 2nd-unit director Mark Redfield, the trailer, various video scans, and additional photos I couldn't fit on this page!  Extra special thanks to Chris MacGibbon of Creep Show Radio for providing all the behind-the-scenes photos. 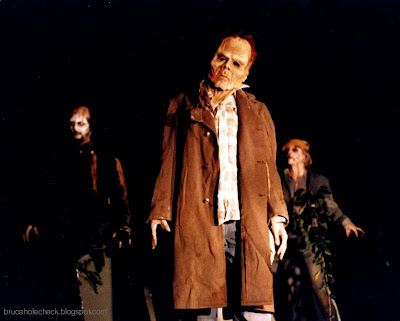